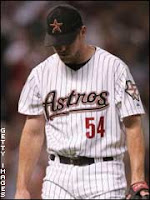 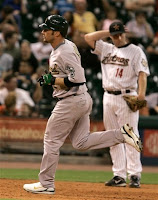 Well, Brad Lidge was putting up great numbers after being banished from the closers role, and the Astros said "I'm sure he's up to the task of being a closer again! Let's give him the ball in the 9th now."

It didn't take long to show he isn't.
He let up a 9th inning home run to Mark Kotsay, who prior to that at bat was tied with me for homers.

It was his third save chance of the year.
He has blown every chance.

He is undoubtedly a talented pitcher.
So was Calvin Schraldi... and Mitch Williams... and Byung-Hyun Kim.

And all of them were traumatized by post season meltdowns.
Maybe Kim can ressurect himself in Florida where even Armando Benitez flourished!


But it is time for the Astros to trade Lidge.
NOW!
While there is still a chance for them this season.
The Astros are 7 1/2 games out, but this division is so bad that a little run can get them back in it.

But you can't have a closer that makes everyone hold their breath the nanosecond he takes his warmup jacket off.

Yes, it began with the Pujols

It was an unbelievable ass whipping of a homer and one people will talk about for a long long time.
Yeah, the Astros won the pennant the next game... but did you notice that Garner brought in Dan Wheeler to close the pennant, NOT Lidge?

And before you label this as cheap arm chair psychology... remember what he did in the World Series right after the Pujols home run.

He let up a walk off home run in World Series game 2, deflating a terrific ninth inning comeback by Houston. Who hit the homer? Scott Podsednik, who had exactly zero regular season homers.

Game 4? The White Sox on the verge of a sweep but the Astros holding on with the score 0-0 in the 8th... Lidge loses that too.

So he loses 3 of his last 4 appearances in the 2005 post season... not a good record.
Then the next year dails his ERA up over 5 and loses his closer job.
Now he has let up more Mark Kotsay homers than has saved games this year.

Trade him Houston... now!
He's your Benitez. Get your Gummy Bears for him and move on!

I am going to count this as my Astros posting.
I've written about the Red Sox, Yankees, Devil Rays, Orioles, Pirates and now Astros...
Who is next in my goal to write about every team
Posted by Sully at 10:18 PM