Last week I was driving in Los Angeles and I saw one of many Dodger billboards that have popped up around the city celebrating the 50th anniversary in LA.

This one caught my eye because it was playing on the Dodgers' unique history of playing a hero to a specific ethinic or racial group.

I don't remember the subtitle, it was something like "Remember who inspired you?"
But it featured pictures of Jackie Robinson, Sandy Koufax, Fernando Valenzuela, Hideo Nomo and Chan Ho Park.

And it's true that if you were a black baseball fan, Jackie would have been your big hero.
Sandy Koufax (along with Hank Greenberg) is the biggest Jewish name in baseball history.
There had been many Mexican players before, but none captured to adoration nor the imagination of Fernando Mania.
And Chan Ho Park was the first Korean player in Major League history, and also the first Korean player to use Scott Boras to get him an insane contract.

And of course there is Nomo.
It wasn't that long ago that Nomo mania swept Dodger land.

I was reminded of this when I saw that billboard... because earlier that day I had read that Nomo was cut by the Kansas City Royals.

Nomo hadn't pitched in the bigs since a horrible 2005 stint with the Devil Rays.
I remember that tour of duty in Tampa well because of one game against the Yankees.
The Devil Rays took an early 10-2 lead with Nomo on the mound... and he couldn't make it out of the 5th.

The Yankees went on to win the game 20-11.
If the Yankees had lost one single game more, the Red Sox would have been division champs in 2005 instead of the Wild Card team. Thanks for the help Hideo.
(Let it go Sully)

But Nomo's career should be celebrated and should be remembered as a fascinating, culturally important and impressive run.

1) He was the first Japanese star to come to America.
2) He showed up during that bizarre post strike, post replacement player spring training and gave people something to buzz about besides labor strife.
3) His first big league game he threw 5 shut out innings letting up only one hit.
4) He had that bizarre twisting motion and crazy delivery that made him seem like a freak of nature.
5) He rattled off 6 straight wins where he went 8 innings or more in each start including back to back complete game shutouts.
6) He started the season 10-3 before finishing the shortened year 13-6 and leading the Dodgers to the 1995 NL West title.
7) He was the first star to have the massive Japanese press corps following his every move.
8) He was the first star that people in Tokyo would watch live at 5 AM in huge public screenings.
9) He was the first star to bring huge crowds from Japan waving flags and holding up Japanese signs during the game.
10) He was the first star to make the rest of baseball sit up and notice that perhaps a way to deal with thinning pitching staffs was to tap into the Asian market.

That first season was magical, even if it ended badly for Nomo by being bombed by the Reds in the Division Series.

And he had more highlights...

The other 4?
Nolan Ryan, Randy Johnson, Jim Bunning and Cy Young.
Not bad company to be in.

His first no hitter in September of 1996 was in a pre-humidor Coors Field...
Quite a feat in itself.

And the language barrier not withstanding, he seemed to have a sense of humor about himself as well. It was fun seeing him phonetically say "I bleed Dodger blue" to Tommy Lasorda. And as a member of the Brewers, raced in the sausage race.

And most importantly, he helped change the face of baseball... literally.
Nomo's early success led to a stream of talent from the Far East creating the greatest sensation of new players since the integration of baseball.

Players like Ichiro Suzuki, Hideki Matsui and Diasuke Matsusaka wouldn't have made their impact on the game had Nomo not come before them.

The last 3 World Series winners have all had at least one Japanese player on the roster and no doubt more are on the way.

A pioneer like Nomo deserves a better send off than 1/3 of an inning mop up work in Oakland and a pink slip.

Which brings me back to the Dodgers billboard.

Each one of the faces on that billboard besides Nomo has been honored in this celebration of the Dodgers in LA.

Jackie has passed on, but Rachel Robinson was on hand for Jackie Robinson day.
Both Sandy Koufax and Fernando Valenzuela took part in the opening day festivities.
And Chan Ho Park is back on the Dodgers roster.

Why not sign Nomo for one day?
Seriously, how much damage can he do in one day?
Give him a start on the Dodger mound... kind of like what the Braves did for Phil Niekro when they gave him one start in 1987 before he retired.

You could have one of the starters ready in the bullpen in case he can't make it through 5... maybe even current Dodgers starter Hiroki Kuroda, whose path to the big leagues was blazed by Nomo.

Dodger fans, wouldn't you want to salute Nomo one more time?
In this year of celebration, wouldn't it be fitting to give Nomo his standing ovataion he deserves? Wouldn't it be perfect if he threw one last good game and had Takashi Saito save it?

Nomo might not be a Hall of Famer, but his importance in the game shouldn't be belittled.

I want to hear from you Dodger fans about this.
I know not all of you show up in the 3rd inning and leave in the 7th.

I want to hear from True Blue LA.
The folks at Dem Bums obsess over the Dodger past... surely they are on my side.
What about Alex at Dodgerfan.net?
Or Jon Weisman at Dodger Thoughts?
Wouldn't the Sons of Steve Garvey want one more night of Nomo Mania?
Or would the Trolley Dodger want another start from Loaiza?

Come on!
You had the Nomo poster in your bedroom?
Let's hear you cheer for the Tornado once more! 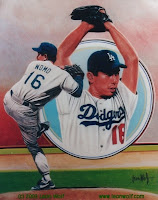