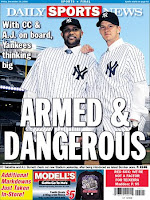 The sky is falling.

Oh dear... oh God.
Let's all act like we're in Tokyo and the "Godzilla siren" is blasting.

(The radioactive dinosaur, not Hideki Matsui.)

When I hear that the Yankees signed the biggest player and how unfair it is, I wonder are we just talking about the present off season...

Or am I talking about EVERY SINGLE SEASON since the 2000 World Series?

I'm not sure why the Sabathia, Burnett and Teixera signings are being treated as anything other than standard operating procedure for the Yankees.

And I also still don't understand why I am supposed to be panicking.

Since winning the 2000 World Series they have brought in a galaxy of stars...
Some of the biggest names in baseball history and yet 8 years later they are still searching for title #27.

How is the signing of Sabathia, Burnett or Teixeira (all very good players) any different that any of these players? 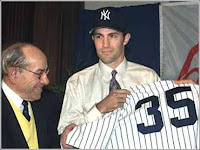 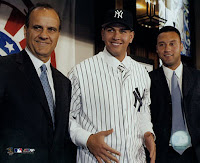 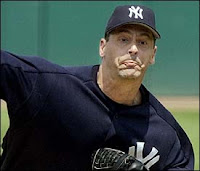 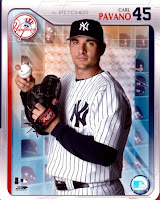 Carl Pavano
(Don't laugh... the Red Sox were bidding for him too.) 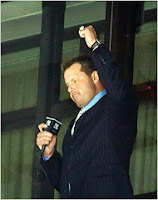 Roger Clemens
(His second time around with his sky box introduction.)

And with each one of those signings, the collective screaming around baseball was "It's not fair! The Yankees just bought another World Series!"

Every year the Yankee fans crow about how the 27th title has been assured and the season is merely a formality.

And not one of the signings I listed above resulted in a World Series title.

Each year they fall short and each year Mike Lupica write the same column about how the Yankees have the big stars but are not the best team.

And now Sabathia, Burnett and Teixera are Yankees.
And before even Teixera signed, Yankee fans wrote on my blog about how they should just fit the Yankees for their rings now.

My Yankee friends are writing to me saying how 2009 will be a Yankee massacre.

And I scratch my head.
Don't they hear themselves?
Don't they realize this is the 9th annual "Drive for title #27?"
How are Sabathia and company going to secure what A-Rod, Mussina, Giambi et al could not?

And Sabathia and Teixeira should ask A-Rod and Big Unit how much fun it is to have the "Win a World Series or you are a bum" standard.

A-Rod has delivered 2 MVP trophies to the Yankees and is considered to be a bum.

And if it doesn't work out (and it didn't for ALL of the All Stars listed above) the Yankees will have their monster contracts in an economy where other teams can't afford them.

The Yankees keep promising to get younger and more athletic... to develop their answers to Pedroia, Papelbon and the other young stars.

And then they get older and more bloated.

Which is fine by me.
The "Sign all the big stars" strategy they've employed since 2000 has yielded fewer World Series titles than the Florida Marlins.

And since the great collapse of 2004 they have fewer post season series wins than the Oakland A's.

Don't get me wrong, Sabathia & Burnett & Teixeira are all good players.
But so were all the players I just listed... and they all ended their seasons in the Bronx with thousand yard stares and overhearing Jeter say "This isn't the same team that won."

So forgive me... I'm still not panicking.