The Bobby Valentine Joke is getting old - a Bleacher Report article 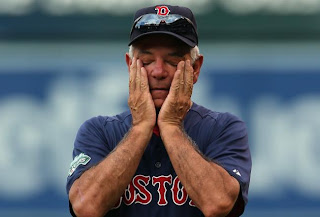 I called for Bobby Valentine to be fired in April.
I wasn't wrong.

I'm not saying the Red Sox would have won the pennant if they did that, but correct mistakes earlier rather than later is what I say.

The Red Sox have an off day today. As I wrote in Bleacher Report. after the 1-8 road trip and his WEEI rant, there is no better time to fire him than now.

He has done worse than lose the respect of the team. He has become a punchline. And there's no recovery from that.

You can read the whole article HERE.