I'm of explaining why I'm not panicking about the Red Sox 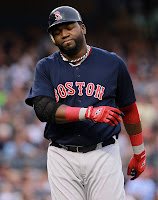 I'm still not panicking.
I'm not.

If the Red Sox can beat A. J. Burnett and not get swept by the Orioles they will be almost there.
And once the playoffs start, their record will be 0-0.

And I'm a broken record on this but I'd rather be UP with 5 games to play instead of DOWN with 4 to play.

Win one of two games tomorrow and it's almost all but over.
Calm down.

Now today's blow out what hardly a teeth grinder. It was over early. But I forgot to put in the last loss against the Orioles.

And I'm going to update the tally.

Hold on.
5 games left.
Don't make me look bad for NOT panicking.