Things are more bleak for the Mets than the Dodgers 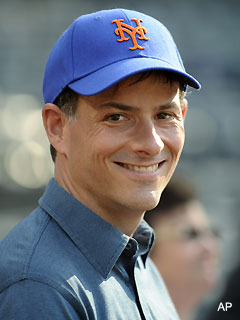 There were more players in uniform than fans in the stands in Dodger Stadium yesterday.
The team is a bankrupt embarrassment with a tabloid divorce looming over the team along with the Bryan Stowe beatings and its grotesque aftermath and MLB taking control of the team.

It sucks to be a Dodger fan.
It's worse to be a Mets fan.

I'll say it. The Dodger mess will be easier to fix.
If a new owner can be put into Los Angeles this off season, the good will in Dodgerland will come around the nanosecond the owner says "My name is NOT Frank McCourt."

The new owner will have a huge fan base eager to put their support behind the team.
AND they have a young MVP candidate in Matt Kemp and a young Cy Young candidate (and probable WINNER this year) in Clayton Kershaw.

Plus he plays in a Division where the Giants can pitch but can't hit, the Diamondbacks are great one year and bad the next, the Padres are great the other years and bad the next and the Rockies forget to contend before September.

In other words, the idea of being a power in the NL West isn't so far fetched. Just add competent ownership!

As for the Mets... well, their problems haven't featured obscene divorces and people in comas. But they HAVE had the biggest Ponzi Scheme in American History hamstring them.

And oh yeah, playing in the biggest media market in the country probably won't help them stumble to their third straight losing season.

And today we found out that David Einhorn, their great knight on a white steed, who was going to buy $200 million worth of the Mets and probably eventually take over the team and lead them to their greatest days ever, is saying "No Thanks."

The Wilpons are still in charge. The Phillies and Braves are still VASTLY superior. The Marlins have talent and will move into a new ballpark next year. The Nationals are developing talent and have the combination of Strasburg and Harper looming on the horizon.

What do the Mets have?
They have Jose Reyes' impending free agency where, once Albert Pujols comes off of the table, he will be the biggest available name.

They have David Wright who is a nice player but no longer a franchise player.
They have nice players like Dillon Gee, Ruben Tejada, Jonathon Niese, Mike Pelfrey and Daniel Murphy.

All nice players.
Not exactly franchise players. Not exactly great building blocks to go past the Phillies, who seem hell to win their 5th straight Division Title and 3 pennant in that same period of time, or the Braves who have stockpiled amazing young talent.

If the Dodgers and the Mets could combine like Voltron, they would be a terrific team. Kemp, Kershaw and maybe Reyes with some nice complimentary players.