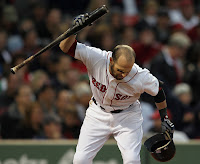 Doesn't it seem like EVERY GAME the Red Sox let up a 2 run home run in the first inning?

Man that is a lousy way to start a game. There's not a lot positive to take out of the game today. Hey! Bard didn't suck!
Hey! What hurts makes you stronger, right?

Put this behind the Sox... and maybe Wakefield can beat David Price tomorrow.
Sure, why not?