Are the Phillies done? 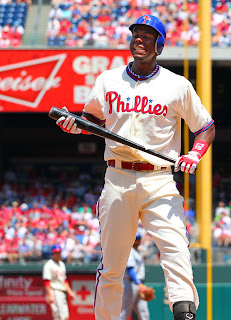 A team had a great five year run. It included multiple trips to the World Series and several consecutive divisions won. Multiple MVPs played on the teams. The deep pitching staff includes a Cy Young winner and another star pitcher who won the LCS and World Series MVP.

But despite all the success there was an aura of disappointment. They won a single World Series but in other years, they lost multiple series where they had no business dropping. And the good times ended abruptly. There was no transition. They went from potential World Series contender to a last place team in one year.

Now what team am I talking about? 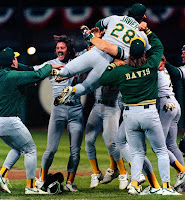 Bob Welch may have won the Cy Young in the rotation, but it was Dave Stewart who brought home ALCS and World Series MVP honors.

Those A's were tremendous. But they only won one title: the 1989 Earthquake Series against the Giants. They lost to far inferior teams like the 1988 Dodgers and 1990 Reds. But after losing the 1992 ALCS to Toronto, the good times ended. Riddled with free agent defections and injuries, the 1993 A's finished in the AL West cellar. It took years (and a Billy Beane mentality) before the A's were any good again.

Which brings us to the present Phillies. From 2007 to last year, they won the Division each year. They won it all in 2008 and another pennant in 2009. Roy Halladay won the Cy Young, but Cole Hamels won the LCS and World Series MVP trophies. Ryan Howard and Jimmy Rollins picked up MVP honors (yes, I know Ryan Howard won his in 2006. The analogy isn't perfect.)

Yet they lost to teams like the 2010 Giants and 2011 Cardinals. The Phillies should have crushed them but they didn't.


And here we sit with about 36% of the season done and the Phillies are in freefall. They've dropped their last six games including a sweep by the Matt Kemp-less Dodgers. Roy Halladay, Ryan Howard and Chase Utley are all on the disabled list. And, despite an excellent 2.92 ERA, Cliff Lee is still winless.

Sure there is about 2/3 of the season to play. But what part of the Phillies game makes you think this team is turning around. They are a veteran team and the rest of the Division looks pretty good.

All great runs come to an end.

Maybe the Phillies of the 2000s and 2010s have reached the end of their line.