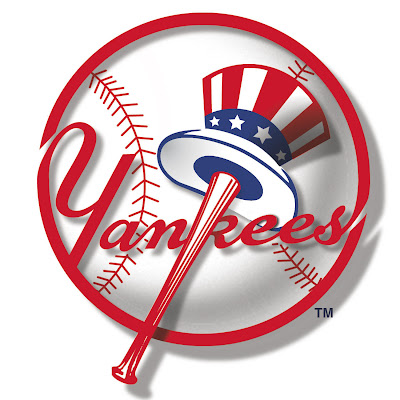 In the second of my series of Why Each Team's Potential World Championship Would Be Good For The Game, I decided to tackle the toughest one and get it out of the way.

Yup. The Yankees. The team that is so universally hated and such a short hand for being the bad guys in baseball that even the enemy little league team in The Bad New Bears was called The Yankees!

And yet the Yankees are the most popular team, get the highest ratings and, oh yes, play in the biggest media market in the country. So SOMEONE must like them!

So as painful as it may be for the Red Sox fan, I have found 10 reasons. Now excuse me as I hold my nose as I type this.

Trust me, I've tried. I try to hate EVERYONE on the Yankees. But there is something about Granderson that is just appealing.

He is respectful of the past, good in the community, clever in interviews (and will be a terrific broadcaster) and plays the game all out.

If anyone understands the Yankee tradition and where being on a championship Yankee team would mean, it is Granderson.

2. A 6th Ring for Derek Jeter... and its repercussions

There will soon be a big and ugly showdown over Derek Jeter's playing time in New York. And 6 rings for Jeter will make the Jorge Posada controversy look like two people having a friendly cup of coffee together.

Can you IMAGINE the refrains from Jeter's followers if he gets benched (as most shortstops in their late 30s do)?

"He has as many rings as Jordan!"
"He has led the Yankees to World Series titles in three different decades!"
"How can you sit him?"

It might be worth sitting through a Yankee World Series parade just to see that happen. 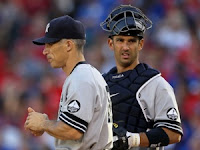 3. Watching Girardi and Posada interact in the World Series celebration

The second worst kept secret in baseball* is the tense relationship between manager Joe Girardi and one time catcher Jorge Posada.

Posada took Girardi's job as a player and Girardi is benching Posada as the manager. And Posada, a DH who can't hit, has no power nor speed, is peeved that he *GASP* isn't playing full time.

Posada probably would be reduced to "token pinch hitting role in a blow out" this post season. That is if Posada doesn't have ANOTHER hissy fit and quit on the team again.

Would they even nod to each other in a World Series celebration?

4. It will be interesting to see how A-Rod will come out badly in after a Yankees Championship

I am telling you... A-Rod could come back from his injuries, launch a few bombs down the stretch, get a walk off shot in the Division Series, win ALCS MVP and bat .500 in a Yankees World Series victory and there will STILL be someone writing about how much he sucks.

There will be SOMETHING he does... he won't use enough pine tar. He'll foul off one too many pitches. He won't look intense when the cameras cut away to him during the game. He will actually make an out. And THAT will be what people will focus on.

And he will respond to it stupidly in a press conference.

He will never win no matter how often he DOES win!

5. A ring for Eric Chavez

Of all of Oakland's stars in the 2000s, only one of them signed a contract extension to stick around the East Bay. That would be Chavez as Giambi, Tejada, Zito, Mulder, Hudson, Damon etc all left for more green, Chavez stuck around and WORE green.

He put in 12+ seasons in Oakland but broke down and signed as an afterthought with the Yankees. He has comeback and become a valuable left handed bat and substitute for the injured A-Rod. The 6 Time Gold Glove winner deserves some jewelry.

6. It will be interesting to see who could criticize Mariano Rivera after another title

He's going to be the all time saves leader. When he became a closer, Dennis Eckersley was still compiling saves and being among the league leaders. Eck is already in the Hall of Fame.

The only way to make an analogy of Mariano's greatness is with one of Eckersley's teammates, Rickey Henderson. When he passed Lou Brock in all stolen base categories and then kept going for another decade, it was clear that we were seeing the kind of player that we may never see again.

If Rivera clinches ANOTHER World Series? And continues to pile up the saves and the super human post season numbers? How could anyone criticize him?

(Oh there will be SOME moron who will.)

7. The aftermath of Multiple Rings for A. J. Burnett

Yankee fans tend to find a players worth the same way you determine the age of a tree: Count the rings!

Was Jeter better than A-Rod? Was DiMaggio better than Williams? Was Mantle better than Mays? The refrain from Yankee fans is always "Who won more rings?"

Well imagine this scenario... A. J. Burnett with two World Series rings and Don Mattingly with zero. Who was the better Yankee? I just counted the rings.

If Burnett wins another, he will have matched the combined total of Mattingly and Thurman Munson. Who was the better Yankee? 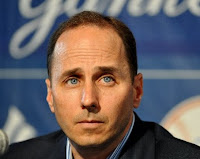 8. Cashman would leave right after a Yankee title and a bizarre chain reaction would begin

There have been rumblings that Cashman wants out of the Yankees front office. His bizarre press conference after the Rafael Soriano signing showed he wasn't 100% happy with the direction of the club. If the Yankees win again, he gets to leave on top.

And no doubt he would get a new gig to show he wasn't just the beneficiary of the deep Yankee pockets. That's when Brian Cashman will get a very rude awakening in the off season.

"What do you MEAN we can't sign Pujols, Heath Bell AND C. J. Wilson? Just sign them. It's only money!"

"Wait a second. What exactly is a salary dump? I have heard that term before but I never understood what it was."

"Wait, you actually expect your prospects to PLAY? They are just trade bait!"

Meanwhile whichever poor S.O.B. who takes over the Yankee GM job is in for the worst time of their life. Any bad decision they make would have the "Cashman wouldn't have done that label" and anything positive would just be chalked up to "Well they are the YANKEES. ANYONE could be GM."

If Cashman fails elsewhere, it would all but confirm that.
And before long Cashman will be hired back... and fired... then rehired... lather... rinse... repeat.

9. It would give Hal and Hank Steinbrenner some teeth.


Let's face it. Hal and Hank have been a big let down. Their dad was amazing and possibly insane and made hating the Yankees a real national obsession. So when he passed away (with his team the defending champs) the baton was passed to the calculating Hal and the passionate Hank.

It looked like Michael and Sonny were running the team.
Instead it is more like Carlo and Fredo. (If I have to explain any of those names, then I feel badly for you.)

What would make this dynamic work better? A championship of their own! And once Cashman is out (kind of like when Tessio got whacked) they can scream at each other for the direction of the team.

And the two of them could claim THEY were the reason the 2011 title was won and bicker for the next 30 years. The headlines that would create would be worth one Yankee title! 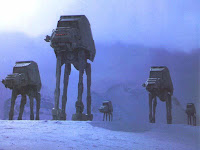 10. Sometimes the Empire needs to Strike Back!

What made the original Star Wars movies better than the new ones? Among all the reasons you can come up with, the best answer I would say is that the bad guys were really awesome in the original ones and COULD win.

The prequels had vague villains. Phantom Menaces. Scheming about tax routes. Robots who could all be shut down by one ship blowing up. I don't even KNOW what they were fighting about in Episode 2.

But in the original Star Wars movies? Right from the start when Vader's Star Destroyer dwarfed Leia's ship you saw the Empire meant business. And sometimes the Empire is going to win. Ask the folks on Alderaan. Ask the Rebels squashed by the walkers on Hoth. Ask the pilots flying the rebel cruisers around the new Death Star in Jedi.

The times when the Yankees have been bad or not really championship quality, interest in baseball dipped. The A's, Pirates, Braves and Blue Jays just don't make for compelling bad guys!

So yeah, just like watching Duke win in basketball, or the Lakers or the Cowboys winning a title, having the big bad bully win from time to time gets everyone pumped up to BEAT THEM NEXT YEAR!

And Yankee fans who might be offended by the Empire analogy, ask yourself. Who would you rather dress up as at Halloween? A Stormtrooper or a Rebel Pilot? Count all the Darth Vaders on October 31 and compare that tally to all the Luke Skywalkers.

It's cool to be the Empire.


I am not going to lie to you. That was tough to write. But I needed to get this one out of the way. And I also know that when I write the Red Sox one, people will say "I bet you would NEVER write one about the YANKEES!"

And I would be able to say "I wrote the Yankees one BEFORE the Red Sox one."
It is a preemptive strike against my critics.