I am very good at picking who WON'T win the NL Central! 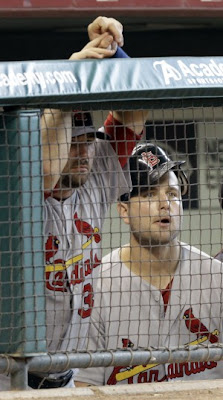 Everyone in the planet seemed to be picking the defending NL Central champ to cruise to another October date... everyone except your pal Sully.

Your Pal Sully took a look at the Cincinnati Reds and thought "Hey! THIS team is exciting, packed with young talent and the defending champ is overrated."

So before the season began, I stuck my neck out and said "THE IS THE YEAR FOR THE CINCINNATI REDS! I don't care what the experts say!"

Quite a prediction, isn't it?
One problem.

I made that prediction for the 2009 season.

Everyone and their cow were predicting the Cubs were going to win their third straight division... so many so that when I DIDN'T pick them, I had to write another post to justify my prediction.

Now I DID predict the actual division champion, the Cardinals, would make the playoffs. I picked them as the Wild Card team, not the Division Champs.

Well THIS year, everyone seemed to think the Cardinals were the no brainer pick to repeat as NL Central champs... again, everyone but your pal Sully.

And look at how the Cardinals are doing. Today the Cardinals got swept by the lowly Astros and fallen 7 games back in the loss column of the Reds.

So who did I pick? The Brewers!

Hey, I thought their pitching was going to be better and I liked their line up.

You know what? Pick the Brewers for NEXT year... I tend to be a year EARLY for the party.