I am doing something this weekend that I have never done in my life:
I am rooting against the Boston Red Sox.

They lost yesterday and I was happy. I want them to lose today and tomorrow.

I have stood by the Red Sox through thick and thin.
I've been a Red Sox fan since the late 1970's.
I have hazy memories of the red hats of 1978 and vivid memories of the 1979 squad.

I had a Yaz poster and loved Jim Rice. I cheered for Roger Clemens, cried in 1986 and was in the stands in 1988 when they lost the pennant in Oakland.

I have not lived in Massachusetts since 1987 and could have abandoned the Sox many times.
I lived in the Bay Area when the Bash Brothers ruled Oakland and they won three pennants and the 1989 title.

The Giants played a Hum Baby brand of ball and won a division and a pennant.

I lived in New York for the bulk of Joe Torre's run.

I am living in Los Angeles in time to see two Dodgers and two Angels division winners.

I've stayed loyal to the Sox every time.

I wore my Red Sox hat proudly in Oakland and the Bronx for post season games.

I appeared on HBO, ESPN2 and NESN as a representative of Red Sox fandom. 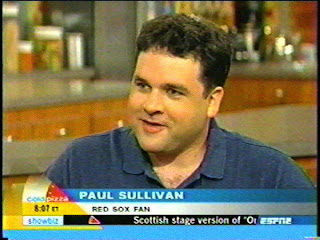 My Red Sox fan credentials can not be questioned.

I have earned them.

So why am I rooting against them for three days?

There is nothing to gain for the Red Sox by winning this weekend.

The season is over. It is a disaster. It has a chance to be the worst season since 1966.

The worst year before the Impossible Dream of 1967 revived the team.

So winning a few games here or there is not going to save the year.

But Red Sox fans can take heart in knowing the Yankees are struggling and could possibly lose the division to the upstart Orioles. And maybe even have to win out to clinch a spot in the post season at all.

There is Red Sox misery this year. It has already happened. But to couple that with Yankee joy would be unbearable.

Hoping the Yankees are scrambling for a playoff spot in the final three games, not resting starters, using Sabathia when they do not want to and having an aura of panic set in the Bronx is worth three more losses in a lost season.

And who do the Yankees play at the end of the year? That would be the Red Sox. And you bet the spirit of Dom DiMaggio, Ted Williams and Johnny Pesky that I will be rooting for the Red Sox in those three games.

It is worth it to see the Red Sox lose Saturday and Sunday to see them have the chance for a spoiler role as the season concludes.

But ending the year knowing that the Yankees could lose the Division and at best use their best pitcher in a one game playoff at the Red Sox hand?

That would be a sweet ending to a rotten year.

All it takes is a 3-2 record the rest of the way. Two losses to Baltimore and three against the Yankees.

Forgive me 2012 Red Sox. But you haven't earned my love this year. Knock the Yankees out. It could be the only thing the team does right all year.

For two games, go Orioles. Then everything goes back to normal.