It's good to be a Met fan now 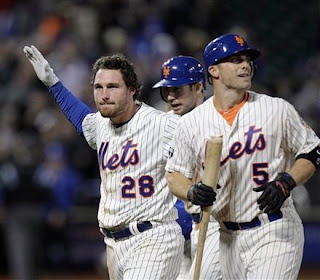 Yeah it is early.
But a 4-0 start is better than most teams. Hell, you can't ask for better.

And guess what?
There have been years when an unexpected team got off to a good start.
The 2008 Rays, after YEARS of never avoiding a 90 loss season, got off to a winning start.

And EVERYONE on the planet said "Oh that's nice. But it is early. And they are in a Division with the Yankees and World Champion Red Sox. They won't last."

Or the Tigers after YEARS of irrelevance got off to a hot start in 2006. "It won't last. Besides they are in a Division with the talented Twins and the defending World Champion White Sox."

Guess what?
Both teams made it all the way to the World Series.

Will the Mets do that?
Probably not.

But these are 4 wins they won't have to make up for later!