My Cy Young picks are not off to a great start 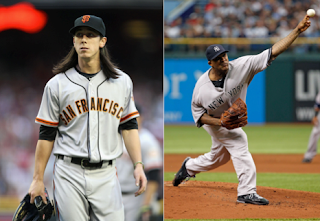 There has been a lot of terrific starting pitching so far this season.

Who didn't look good?
My picks for the Cy Young Award.

Tim Lincecum let up a pair of first inning homers and was chased out in the 6th inning.
C. C. Sabathia (sorry, I still used the periods) coughed up a first inning grand slam to Carlos Pena.

Is there enough time in the season for Linecum to lower his 8.44 ERA?

By the way, for those of you who don't understand why wins, while important, can be overrated, please consider the fact that if Mariano Rivera didn't cough up the lead in the 9th, Sabathia would have won yesterday's game with his 6 inning 5 earned run performance.

Meanwhile the other day, Pirates starter Eric Bedard went 7 innings, gave up just 1 run against the Phillies and got the loss.

Which one pitched better?

Then again, it IS early.