Reds ensure a spot on the "Worst Contracts of 2020" list 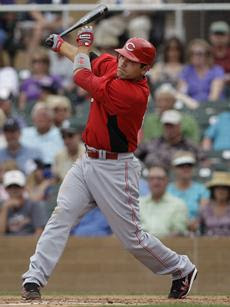 Peter Paul and Mary said it best.
"When will they ever learn?"

Joey Votto is a wonderful player.

He's a power hitting, Gold Glove winning former MVP home grown hero who is a lock to be a Red for a decade plus and give Reds fans some consistency.

Since 2010, Adrian Gonzalez, Prince Fielder and Albert Pujols have all left the National League. Thus Votto has a whole bunch of National League All Star appearances to put on his resume.

The Reds think that in 2022 that Joey Votto will be an elite player?
How many Jason Giambi, Vernon Wells and Todd Helton contracts need to be signed before people realize that they probably shouldn't sign someone to longer than 5 years?

I said in our Albert Pujols video that 10 years is a super long time for a contract.
It is a little less risky for Votto because he is 27 years old as opposed to 32 (or maybe 48) like Pujols is.

But the Reds are banking that he will have twice as many great seasons has he already logged.

And he's a first baseman, the single easiest position to replace. Sorry, but it is.
Are the Reds one of those deep pocket teams that can withstand a big huge, clogging up the payroll, contract?

9 years from now, if Joey Votto isn't one of the elite sluggers in the game at age 36 but is still making big money, Cincinnati fans will be grinding their teeth over this contract.

But hey, as long as they got good press NOW.

My kids are in the first grade. When this contract ends, my kids will be seniors in high school.
Call it a hunch, but I think they will be saying "Man, that Votto contract stinks."