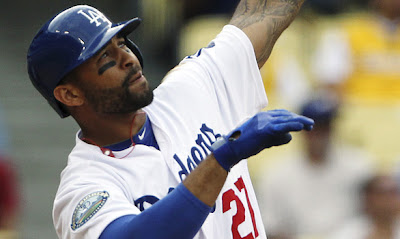 When the season began, Matt Kemp, who I think should have won the MVP in 2011, looked like a man on a mission. He was going to win the big award this year and carry the Dodgers on his back. His OPS, his batting average, his power numbers, everything looked like he was playing on another level.

The Dodgers were in first place and it seemed like every other game ended with a Matt Kemp homer.

Then his injury and time on the disabled list started. At first the Dodgers didn't miss a beat.
Then they missed beats, fat pitches and scoring any runs.

He is last game before going on the disabled list was May 30.
The Dodgers were 32-18, the best team in baseball.
In his absence they went 15-22, fell out of first and went nearly a week without scoring a run.

Kemp is back, he is hitting and extended the game with an RBI infield hit and won it with a walk off.

If the concept of "absence making the heart grow fonder" can help an MVP vote, then Matt Kemp's time on the DL showed just how valuable he is to the team.

What I am saying is, he isn't bad.