Why doesn't anyone love the White Sox?

My mom went on a business trip to Chicago in 1990 and when she was there she wanted to get me and my brother a sports related gift.

She noted that there were tons of Cubs shirts and hats (they were fresh off of the 1989 Division Title).

There were lots of Bear souvenirs. Michael Jordan Bulls jerseys were everywhere. There were even lots of Blackhawk sweaters and caps available.

Then my mom asked “Is there anything for the White Sox?”
The store clerk directed her to the back of the store. There was one rack of White Sox T-Shirts.

The White Sox didn’t get love then and nearly two decades later they STILL can’t get love.

A month ago Ozzie Guillen went on a profanity laced tirade about how Cubs obsessed the Chicago media is… and he was right.

The White Sox are in the middle of an 8 game winning streak and are in first place. They are one of the best and most surprising stories in baseball this year.

Nobody is covering it. The White Sox are still pushed to the back of Sports Center.

Red Sox and Cubs fans were always mentioned as the longest suffering, with not even a charitable toss to the White Sox fans.

When the Red Sox won the 2004 World Series, it was treated as an event only slightly less significant than Columbus landing in the West Indies.

Graves were visited, tears were shed and your friend Sully got to make some HBO appearances.

When the White Sox won the 2005 World Series after an 88 year wait… nothing. They didn’t even get the cover of Sports Illustrated!

During the World Series there were reporters asking Cub fans how they felt. How about asking a few White Sox fans?

Why is this the case?
Why is a team that plays in one of the biggest markets in America, has a rich history and certainly has won more games than their counterpart in the North Side, and has delivered a World Championship to Chicago treated as a baseball after thought?

I guess the North Side of Chicago is a little safer and Wrigley Field is a little more cuddly than Old Comiskey or the sterile soul less New Comiskey (or whatever they are calling it now.)

I went to the New Comiskey the first year it was open. It couldn’t have had less charm if it were designed by Vulcans.

Of course it was the last baseball stadium built before the recent rash of fan friendly retro parks. The White Sox turned down a chance to have their new park designed by the firm that created Camden Yards. I wonder if the White Sox were the first out of the gate with a retro park if they would have a more loyal following.

I saw fair weather fans in the Bay Area shift from the A’s to the Giants once the Giants opened Pac Bell Park. And the shift stayed in San Francisco even when the A’s were putting a much better product on the field. Of course a lot of that has to do with Barry Bonds.

But it has to be more than that.

Is it their stars? Are Cubs stars more fun?
The Cubs had Ernie Banks 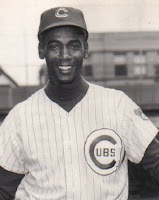 , possibly the most lovable Hall of Famer of all time.
And look at how loved the Cub stars are when you mention Ryne Sandberg or Andre Dawson to a Cubs fan. My buddy Rob Paravonian, a big Cubs fan, rooted for the Diamondbacks in the 2001 World Series because Mark Grace was on the team.

“I like to see a Cub win the World Series.” He said, knowing that was the only way a Cub could possibly get a World Series ring was on another team.

The White Sox had Frank Thomas 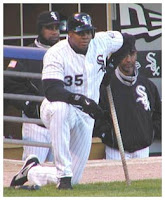 , the Big Hurt, who always seemed a little pissed off.
Carlton Fisk, who was a White Sox longer than a Red Sox, never seemed to fit in.
Harold Baines seemed more respected than loved.
Lamar Hoyt wanted out of town before smuggling drugs into the country through his jock.

Yeah the White Sox threw the 1919 World Series… but that was 89 years ago folks. And let’s face it, throwing that World Series not only removed the stigma of gambling from baseball until Pete Rose, but also gave us Eight Men Out and Field of Dreams… two of the best baseball movies ever made.

Is it the uniforms?

The White Sox have changed their look around while the Cubs have remained more or less the same over the years.

But honestly, while the White Sox have changed their look (until going back to the classic uniforms they wear now) they gave baseball fans some of the most spectacular bad uniforms in history!

The block SOX across the front.

The White Front of the cap.

The numbers on the leg.

That variety should be celebrated!

And also while the Cubs were promoting Ivy and getting drunk in the bleachers, Bill Veeck gave baseball exploding scoreboards and Disco Demolition night.

Give the White Sox some credit for TRYING!

So the White Sox may never get the love the Cubs get…
Even though they have delivered more World Series titles this decade than the Cubs have in the last 99 years.

And the bad wagon fans may not embrace a team managed by the most entertaining manager baseball has produced since Billy Martin.

But I wonder… do White Sox fans care?
Do they have a chip on their shoulder that their team doesn’t get Cub love or Red Sox attention?

Or do they own that slight as a badge of honor?

Do they ask “Why don’t we get mentioned as a great franchise? Our team didn’t move like the Dodgers did or the Giants!”

Or do White Sox fans say “Who cares about love from outsiders? It’s trendy to like the Cubs… but it takes a real fan to love the White Sox!”

And how delirious were you in 2005?
Is that your cell phone ring?
Did you visit your grandfather and grandmother’s graves?

I want to hear from you White Sox fans…

Hey everyone at South Side Sox... do you care you aren't getting the national press?

Do the folks at the hilarious Sox and the City tear up when they think of Bobby Jenks getting the final ground out in Houston?

How about you, Carl Skanberg? When you write your hilarious Pale Hose 8 comics, do you wish your team had the national love that the Cubs have?

Let me ask you, Jim at the Sox Machine... do you just not care?

I want to hear from you White Sox fans... including at Sox Talk

And while we are at it, are there more White Sox t shirts available ?