OK, we now have our World Series match up. I personally was hoping for a Tigers and Phillies World Series so we’d have a Verlander vs. Halladay.

Then I wanted Tigers vs. Brewers...
So naturally I got Rangers vs. Cardinals.

Now my fellow Red Sox fans might be wondering who they should root for... those who can bring themselves to watch baseball in the post on field and off field collapse of the Red Sox.

Well, one thing is for sure, you should root for a seven game series, which baseball needs more than a resolution to the Dodger and Met mess.

But what if it comes down to a 7th game and a tie score in the 9th?
Who should Red Sox fans root for?

It's an easy call.
Root for the Rangers... let me count the ways. 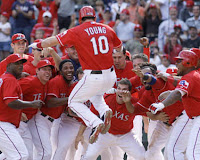 1. Not one member of the Rangers 25 man roster has a World Series ring

OK, that's not a Red Sox related reason, but it is pretty cool when you think of it.

If the Rangers win the World Series, every single player in the pile would be celebrating their first title. Having a whole team where it is the greatest moment in their life for ALL of them? That's pretty awesome. (The Molinas, Pujolses, Carpenters and LaRussas all have theirs.)

2. If the Rangers win, would Nolan Ryan’s “Let them pitch” style would be the direction of the new Red Sox.

The Red Sox need to rebuild their pitching staff and it will take more than banning fried chicken from the clubhouse to do it.

I fear coddling of pitchers more than the Colonel's secret recipe. I think it has already claimed Clay Buchholz and the old Sox management hasn't exactly produced the 1995 Braves... or the 2011 Rangers for that matter.

Ryan has let the pitchers PITCH and lo and behold the depth of their staff is one of their strengths. Win or not, the Red Sox should emulate them. Hope the Rangers win do the Sox will have to notice that Ryan has delivered much better results than copying Moneyball. 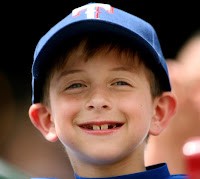 3. How often do you bump into a taunting Rangers fan?

If you are a Red Sox fan, no matter where you live, you will inevitably live or work near a Yankee fan who will give you crap about the great collapse.

Same with a Phillies fan or a Mets fan (although Met fans should keep their traps shut.) And maybe a Cardinal fan too.

When was the last time you uttered the phrase "I work with the most OBNOXIOUS Texas Rangers fan"? I am guessing never. That's a good thing. You don't want taunters to have the ammo of "And MY team won the World Series!"

4. Texas can become a free agent destination instead of the Yankees

Let's face it, Sox fans. This is going to be a lousy off season with the change in management and all. I don't know how many free agents are going to be running to Boston. And frankly the Red Sox have been spending too much on free agents recently. They need to develop their own players.

But we also don't want to see the C. J. Wilsons et al sign with the Yankees, do we? Well as Cliff Lee showed us, players are allowed to turn down Yankee money. And maybe if the Rangers keep winning and show they have a stable organization, maybe people will be heading to Texas instead of the Yankees.

Besides, can't you get a big huge mansion in Texas with low property taxes? DEEP IN THE HEART OF TEXAS!!!

5. Hey! Adrian Beltre is a former Red Sox All Star!

Shouldn't we be rooting for former Red Sox All Stars?

OK, so Beltre was only a Red Sox for one season and he wasn't exactly beloved... but it would be easier rooting for him to win a ring with the Rangers than say Clemens or Boggs with the Yankees... or Eckersley and Hendu with the LaRussa A's.

6. Come on… you can’t root for LaRussa or McGwire!

Isn't there something you don't like about Tony LaRussa? I could never figure out why I don't like him. It has nothing to do with him being a lawyer or doing that Glenn Beck thing. There's something about him that rubs me the wrong way. Seeing the Red Sox clobber the Cardinals in 2004 made it a little bit sweeter.

And McGwire, forget about it. Some steroid guys I have some sympathy for. This guy? He would have had Ron Kittle's career if not for the juice.

And together they massacred the Red Sox in the 1988 and 1990 ALCS. Seriously, you want THEM to be happy?

7. We can’t have the Cardinals also winning 2 World Series in the last 10 years!

The last few months have been so brutal to us Sox fans that it feels like everything positive of the past 10 years is getting more and more blurry. There's not a lot left for us to brag about.

Well since 2001, the Sox are the only team to win multiple World Series. That's still cool... except the Cardinals will spoil the fun if they win this year to go along with their 2006 title.

We need the Rangers to win for our own pettiness.

Remember that wonderful feeling we all felt in 2004? That great sense of relief! We had gone our whole lives thinking "Man, I'm never going to see the Red Sox win the World Series." Then suddenly they did. It made everything a little better.

Even seeing the Yankees win in 2009 and the Red Sox collapse in 2011 doesn't hurt the way it used to.

Now imagine you are a lifelong Rangers fan. The franchise had NEVER won the World Series. Hell, until last year they had only won one playoff GAME! The idea of being a World Series champ seemed pretty far fetched. If they win, then the die hard Ranger fans... the one that loved Pete O'Brien, Dean Palmer and Rusty Greer... would have THEIR moment they had waited their whole lives for.

Someone else deserves that kind of happiness.

I am not going to get political here. All I am going to say are two things that I don't think anyone can deny.

1. George W. Bush would probably be happier if he were the Commissioner of Baseball rather than the former President of the United States.

2. He seems very happy being out of the political fray.

There might be pressure for him to be more vocal in the scrum that will be the 2012 election. For his sake and ours, I hope he is just going to sit back and savor another summer watching the Rangers defend their title.

10. SPIKE OWEN WOULD GET A WORLD SERIES RING

This is the BIGGEST reason for the Red Sox to root for the Rangers. He is the manager of the Texas Rangers AAA affiliate, the Round Rock Express. If the Rangers win, he would get a World Series ring as a member of the organization.

Spike was of course the starting shortstop of the 1986 Red Sox. He came along with Dave Henderson from Seattle in an August trade and greeting Hendu at home plate when he hit the go ahead homer in Game 6 of the World Series... the homer we all thought would clinch the World Series.

Owen was a typical Red Sox infielder from the Yawkey years. Not flashy, got his uniform dirty and whiter than the Bushwood Country Club directory.

Every time a member of the 1986 Red Sox gets a ring, an angel gets their wings. I think that's how it goes.

Say it with me! Let's go Rangers!
(Just don't yell that at a Bruins game.)