What should baseball want? A 2-2 World Series after four games!

It gave the Marlins the win and suddenly took a World Series that everyone assumed the Yankees would win and turned it into anyone's series.

The Marlins went on to win that World Series.
Why am I bringing that up now?

Because when the ball cleared the fence in Joe Robbie Stadium (or whatever the hell it was called in 2003) it was the LAST time a World Series was 2-2 after four games.

A 2-2 series is a wonderful place to be in terms of excitement. After four games, no leader has emerged. Virtually every great World Series was 2-2 after 4.

Even the ones that ended after 6 games were thrillers 2-2 after 4.

When a team falls behind 3-1, it doesn't put the series out of reach but it puts one team at a tremendous disadvantage.

Since 2003... what have we had?
The 2004 World Series was great for us Red Sox fans but a real snoozer for everyone else. Forget a lead in the series. The Cardinals never had a lead for an INNING!

Every single game of the 2005 World Series was close and exciting. The problem is the White Sox won all four games. Clean sweeps are never good unless your team is doing the sweeping.

The 2006 World Series was super sloppy and more memorable for the Tigers pitchers making a ton of errors. It was 3-1 after 4 and over after 5.

The 2007 World Series was another Red Sox sweep. At least this time the Rockies led for a few innings of Game 2. 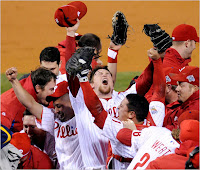 The 2008 World Series was 3-1 Phillies after 4. And the game 5 took 3 or 4 days to play because someone forgot to read the weather forecast.

The 2009 World Series was the last one to go more than 5 games, but the Yankees were up 3-1 after 4 games and it was inevitable that the Phillies were going to lose one game in the Bronx.

And last year was 3-1 with Tim Lincecum on the mound for the Giants.

It's hard for a World Series to gain momentum and national attention when it is pretty obvious who is going to win after 4 games.

Now I am rooting for the Rangers to win. I listed my reasons for that in one of my previous posts.

But what should EVERYONE who isn't a Cardinals or Rangers fan be cheering for?
A split of the first two in St. Louis and a split of the next two in Arlington.

We've have had some wonderful games in the last 7 post seasons. We've had the Red Sox come back against the 2004 Yankees. We've had the Astros Cardinals series of 2004 and 2005. We've had wonderful 5 game Division Series involving the Angels and Yankees and the Rays and Rangers.

The Mets and Cardinals had a heart racing 7 Game Series in 2006.
The Red Sox had two more 7 game ALCS thrillers... one they won against the Indians and one they lost to Tampa Bay.

And yet each and every year, the World Series is an anti climax.

The greatest World Series I ever saw played was between the Braves and Twins in 1991.

One played in the midwest inside of a dome.
The other was down south in a cookie cutter stadium that was empty just the year before.

This year you have THE team of the midwest playing a team in the 4th biggest media market in the country.

Have it go into a 5th game tied 2 games a piece and have Chris Carpenter stare down Josh Hamilton.

THEN you can have a true October classic.