It's August and the Reds are the best team in baseball 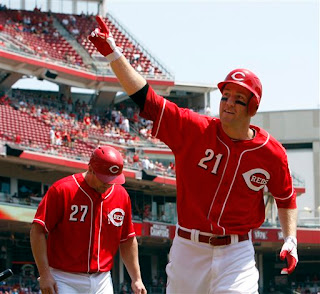 It looks strange to type that.
I had to double check it.

Using the barometer of wins and losses, no team in baseball has had a better year than the Reds. (Sorry "Run Differential." You are not trumping wins and losses yet.)

It's not the Yankees nor the Rangers. The surprising Nationals are not the best. Nope. It's the Reds.

After this afternoon's 9-4 defeat of San Diego, the Reds have raised their record to 64-41.

They are doing it without Joey Votto. Replacement first baseman Todd Frazier homered for the 13th time this season. Johnny Cueto improved his record to 14-5 with a 2.52 ERA.

With a .610 winning percentage, the Reds are on pace to finish the season 98-64, which would be the sixth highest win total in the team's 131 year history.

Should this Reds team be looked upon as a World Series front runner? They are the best in the game as of this writing and there are only a few months to go.

Well, as we have seen the past few Octobers, it does not matter so much what your record is as when you get hot.

St. Louis got hot in October of 2006 and 2011. In neither year were they the best team in baseball but they wound up winning the series.

The 2007 Rockies of course became unreal, going from also rans to pennant winners.

The Reds are superhot now. They have had a six and ten game winning streak since early July. They were 45-38 on July 6th.

They have also been playing the likes of San Diego, Colorado, Houston and Milwaukee during that stretch. Not exactly the caliber of teams they would face in the playoffs.

It is clearly important to win the games against the lesser clubs. But this is also an instance of a team peaking with two months left to play. The Reds are on top of the baseball standings as of this writing but only three games in the loss column ahead of Pittsburgh. The best team in the game is not even assured a spot at the playoff table.

The Reds are a great story now. For their sake, I hope they have another great streak in them. Preferably one that starts around the last week of September.