Yeah DeLuca, I know Curt Schilling is a blow hard

I need to answer one of my blog's critics head on...

Mr. Chris DeLuca (left), the creator of What Sucks, possibly the funniest blog in blogdom, and yet another Yankee fan struggling with the notion that his baseball team is as unreliable as his football team (the Jets), has asked me to address the fact that Curt Schilling is an a-hole.

We all know that.
We also know water is wet.

Yes, Curt Schilling is a bombastic, "Where's the spotlight?", overly dramatic ham who is probably insufferable in person.

Yes, Curt Schilling let's his opinions known (including his conservative Christian views that have done irreparable damage to the country, the state of health care and science) and is quick to think that everyone gives a crap. 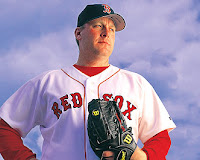 Yes he is obviously angling for a second career (which for the sake of the nation I hope is in broadcasting and not politics... or medicine for that matter.)

And his biggest moment on the stage, the bloody sock game (yes DeLuca, it was blood) was shamelessly played up for the camera.

So as a Red Sox fan, what would I change?
Absolutely nothing.

If being a full of himself blowhard is what he needs to have a 6-1 postseason record with the Red Sox (including 2-0 in games where the Sox were on the brink of elimination and 2-0 in World Series starts) then by all means, tell us your thoughts about Iraq.

If showing off the bloody sock is what you need to beat the Yankees and the Cardinals in 2004, then put up a neon sign pointing to it.

When Theo went to Arizona to pretend to like Shonda's mashed potatoes on Thanksgiving 2003, he was trying to woo a big game pitcher to throw along side Pedro and put the Sox over the top.

I think it kinda sorta worked.
He brought in one of the few people to win a post season MVP award for two different teams (the 1993 Phillies and the 2001 Diamondbacks) and I think it is safe to say the fans there didn't mind his act either.

It's all good as long as the production is there in October.

Let me put it in terms a Yankee fan can understand.
In 1976 the Yankees were desperate for a title (they hadn't won since 1962) and were just humiliated in the World Series by the Reds.

In came Reggie.
Was he a blowhard?
You bet.
Was he beloved in the clubhouse?
Only if by "the clubhouse" you mean "Fran Healy."

Why did they bring him in?
Because he showed up big in the big games. (Ask the 1973 Mets how much they liked facing him.)

Did Reggie show up for the Yankees?
You bet...

Will Yankee fans always love him?
They should. In fact they should still sell Reggie bars at the stadium.

Now what is the difference between Reggie Jackson and Curt Schilling?
One helped the Yankees and the other brought down the Yankees... twice.