MY PREDICTIONS... granted 3 games in 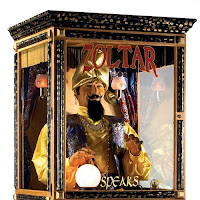 Yeah yeah yeah... I know I'm supposed to do this before the season starts.

Yeah I know we've had the two A's/Red Sox games in Tokyo and last night's thriller in Washington.

But there are 30 teams with at least 160 games to play.
So I think these predictions have every bit of validity to be wrong as the other experts!

Last year I had the Giants and the Cardinals in the NLCS!
Whoops!

I had the White Sox, not the Red Sox in the post season.
Gulp.

But I also predicting the Diamondbacks would make the post season.
So even a broken clock is right twice a day.

So here are my INCREDIBLY SUSPECT PREDICTIONS FOR 2008!

AMERICAN LEAGUE EAST CHAMPION
BOSTON RED SOX
I know you are thinking "A homer pick."
But truth be told I always pick the Yankees. Even last year. But this year I think there is too much talent.
Dice-K should have a better year, Beckett will be fine as will Buccholz (provided they don't treat him like a Fabrege Egg) and Lester & Wakefield will be as good a rotation in the league. Papelbon is king and the line up could actually be better.

Think about it... Papi had a bad knee, Manny had a sub par year, J. D. was garbage in the regular season as was Lugo.

If those guys plus Ellsbury give them a better year, they might actually score MORE runs. (Scary thought for Anaheim, Cleveland and Colorado.)

The Yankees will contend but there is too much pressure on Hughes, Kennedy and Joba to win it. Those bats plus Rivera and Joba closing out games will keep the win total in the 90s.

The Blue Jays have the arms and the bats to win 90 games. If the Red Sox or Yankees stumble, watch for them to win the division.

The Rays dropped "Devil" from their names, but it won't change the fact that following this team is a special level of hell.

The Orioles have blown up their team, which they should have done years ago. They won't win more than 65 games.

They blew it last year and they know it. Why didn't Joel Skinner send Lofton home? Oh well. They still can pitch and hit. They have super talent in the line up and Sabathia is a legit ace. Until further notice, this is the team to beat.

A lot of people are picking the Tigers based on their awesome line up and Verlander heading the rotation. Since when has stock piling hitters brought a team to the promise land? The Giambi/Matsui/A-Rod/Sheffield/Damon/Abreu era of Yankee baseball has produced fewer World Series titles than the Marlins. I don't trust Rogers, Robertson nor Bonderman and injuries have decimated their bullpen. Plus their second half collapse was bad for Leyland's lungs.

The Twins are in a rebuilding phase and kicking themselves for letting 2006, their best chance at a title, slip away. They'll be back.

The Royals will be interesting as they slowly put together some talent, especially Gordon, Bannister and Butler. Dayton Moore is building the team in the mold of the 1990s Braves... which were built on the mold of the 1980s Royals. It's the circle of life.

And yes, I'm picking the White Sox to be in the basement. What a fall from grace... looking like a potential repeat World Champ in August of 2006 to being an old and not very good team. Why didn't Kenny Williams trade Beuhrle, Dye et al for youth?

Yeah, I know they can't hit. I know that Richie Sexson looks awful and they will struggle to put runs on the board. Guess what? So did Arizona last year... and I think adding Bedard and Silva to this rotation will mean they can outpitch most. There are always bats available at the deadline (perhaps Junior?)... But arms like Bedard and King Felix are harder to find.

I was going to pick the Angels, but funny... when you lose your two best starters and some key relievers, it makes me think it might not be your year.

The A's are going to better than people think provided Rich Harden stays healthy. And keep in mind with this division... if the Angels collapse from injury and the Mariners just can't hit... who knows?

The Rangers stockpiled talent over the past few trade deadlines and have lots of young talent (pay attention, White Sox.) And ask the Orioles if they can score runs... like 30 in one game. Any rotation that is lead by Kevin Millwood, Vincente Padilla and Brandon McCarthy can safely book their family vacation time for early October.

There is too much firepower on this team and too many mediocre pitching staffs to beat up. Plus the new Joe will add a spark to the clubhouse. It won't be pretty, but A-Rod, Jeter and company should win 90-95 games and hold off the Blue Jays, Tigers and Angels

They are old... they are coming off a collapse that just gets worse the more you think of it... but adding Johan Santana reminds me of how the Red Sox dealt with the Aaron Boone aftermath. They knew they HAD to win, so they pushed all the chips to the center of the table and picked up Schilling and Foulke. The Mets know it is now or never...

The Phillies have the best lineup in the NL, but Brad Lidge couldn't even make it out of spring training in one piece. The Phillies played great in 2007, but their division title was as much the Mets' collapse as it was their victory. I don't trust their pitching and neither should you.

The Braves have the arms (and a Glavine and Smoltz reunion), the bats and the experienced manager. Remind me who is closing for this team? And if Mike Hampton starts 30 games, I will give $40,000 to Pat Robertson's ministry.

The Marlins are chocked full of talent thanks to raiding the Red Sox and Tigers farm systems. They may not win it this year, but they have a good bullpen, so they won't let winnable games slip away. And Hanley Ramirez is a franchise player. Watch him lead the Marlins to the 2009 World Series title and then be traded off to the Tigers.

Not exactly sure what the Nationals are doing. They have some young talent... and obviously the "character" question never comes up. Dmitri Young, Elijah Dukes and Lastings Millidge on the same team? They may lose 100 games (which I think they will) but it will be interesting!

It's been 100 years since a Cubs team has been crowned World Champs. This Cubs team has as good a chance as any to win their first pennant since 1945. They can hit, they can pitch (provided Zambrano keeps his post-beating the crap out of Michael Barrett stuff going) and I predict Kerry Wood will flourish as a closer. Plus won't it be fun hearing drunk Cub fans mispronounce Fukedome?

The Brewers are going to make it very interesting... they'll pitch hit and field well. They are also going to have Eric Gagne close. People who think closers are overrated are going to have a hard time explaining their position after seeing the bullpen torpedo Milwaukee's season.

Dusty Baker will make the Reds fun at least...
and with Harang and Arroyo heading the rotation, maybe this can be this year's Diamondbacks or Rockies. His son is now old enough to be a batboy. It's probably Griffey's last year in Cincy... it's now or never.

No Biggio? No Bagwell? These are the Astros? It's impossible to completely count out a team with these bats and Oswalt heading the rotation.

Pirate fans born the year Sid Bream slid across home to end the 1992 NLCS are now 16 years old. Seeing you don't really follow a team until you turn 7 or 8, there are 24 year old Pirate fans with no memory of their team being relevant. They are probably going to tie the Phillies of the 1930s and 1940s for most consecutive losing seasons. I'm not a big enough Jason Bay or Ian Snell fan to see things getting better.

Is it possible the Cardinals won the World Series as recently as 2006? This team is going to resemble the Orioles and Giants of the last few years... old, slumping and not fun to watch. Tony LaRussa is resigning after this year.

Having Joe Torre replace Grady Little is a seismic change that can not be marginalized. The Dodgers are loaded with talent and stable veterans. But under Little, it turned into a civil war in the clubhouse. Torre won't stand for it and they'll play hard for him. Their rotation is too good and they have too many solid bats.

The Diamondbacks can pitch with anyone and picking up Haren just makes them more deadly in a short series. But their bats still stink and everything (save for Randy Johnson's injury) broke right for them last year. Teams that get outscored probably won't win back to back pennants.

The Padres can pitch. Boy can they pitch. And boy they can't hit. Their arms will keep them in contention and if Gonzalez and company hit better than expected, they might actually clinch a playoff spot even with Trevor Hoffman pitching.

I personally found the Rockies story last October to be perfect... they came out of nowhere and stunned everyone by winning the NL Pennant and then got killed by my Red Sox. What was not to love? It was a nice story, but they will come back to earth (and the pack) this year.

I feel for my dad. His Giants could celebrate their 50th season in San Francisco by losing 110 games. They spent the last few seasons just ringing the cash register when Bonds played and surrounding Barry with nice but not effective veterans. Well remove Bonds from this team and you have Ray Durham, Randy Winn and Bengie Molina being asked to carry the offensive load. The other Barry needs to show his contract wasn't one of the worst free agent signings ever. The stud arms of Lincecum and Cain will be the only things worth watching.

I can't pick against those arms. The Phillies, Padres and Brewers will all contend to the end... but Arizona will shut down too many lineups.

Yeah that's right.
I'm picking the Red Sox to win it all. I've never done that before. Even in 2004, I picked the Astros. But let's just say I feel good about this team.

And yes, I am predicting yet another heartbreak for the Cubs.

Let's finish up... the season is starting:

AMERICAN LEAGUE MVP - Alex Rodriguez, Yankees
Really sticking my neck out with that one.