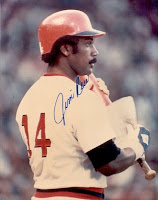 The Boston Red Sox have a policy about retiring their players numbers.

It goes as follows:
• Election to the National Baseball Hall of Fame
• At least 10 years played with the Red Sox


Now there is something to be said about that...
It makes sure that only legitmately great players get their jersey retired.
(I guess Rich "El Guapo" Garces won't have a ceremony any time soon.)

And it also prevents players who only had a cup of coffee with the Red Sox to be honored.
(No retiring #41 for Tom Seaver I guess.)

And nobody can argue the numbers retired for Red Sox players represent some of their greatest players.


But it is also excessive.
And if the Hall of Fame is too stupid to keep Jim Rice out, then the Sox should do the right thing and retire his number anyway.

He was the captain, a consistent MVP candidate and maintained the tradition of terrifying hitters in left field.

Put the policy to bed and hang #14 up there.
Nobody has worn #14 besides Jim Ed Rice since 1975 anyway, so why not make it official?

I suppose with one more year of eligibility they are hoping Rice gets elected and he finally gets his due at Fenway.

If the Reds can retire Ted Kluszewski's number, then I think the Red Sox can honor Rice.

Have you looked at the Astros retired numbers?

(I am guessing the answer to that question will be no)

Why not Bob Watson?

Retiring numbers is an emotional ceremony and it should be used to honor the players who honored their team.

I know some people think the Yankees retire too many numbers but I think it is cool...
Obviously you retire Gehrig, Ruth, DiMaggio, Berra, Mantle, Ford and Stengel

Which one of those players didn't honor the Yankees?

The Hall of Fame rule should be reviewed.

Chances are Big Papi won't be a Hall of Famer (he won't have enough MVP caliber seasons) and probably won't play 5 more seasons and meet the 10 year minimum.

But shouldn't he have his #34 retired?

Or take a sure fire Hall of Famer, Pedro Martinez.
He only played 7 years for the Red Sox but gave the Sox one of their most dynamic aces in their history (and was a big member of the 2004 World Champs.)

And besides, with the 10 year hall of fame rule, the Red Sox should have retired #26 for Wade Boggs. But they didn't

I guess because his number was retired in Tampa for his storied career as a Devil Ray.

Loosen up Red Sox...
Jim has earned it.
Retire his number
Posted by Sully at 8:54 PM