I am actively rooting against one of the greatest stories in BASEBALL HISTORY!!!! 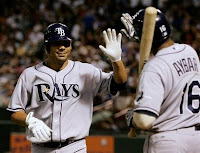 I don’t think I am exaggerating by saying the Rays winning the division would one of the greatest stories in baseball history.

It would be bigger than the Twins and Braves going from last to first in 1991.

It would be comparable with the Miracle Mets of 1969.
Like the Mets the franchise was a laughing stock only once getting above 70 wins before shockingly becoming a powerhouse.

But the Rays are doing it in an economic climate that supposedly prohibits small budget teams from winning.

Sure, a team like Florida, Oakland or Minnesota could win… but there was no free spending behemoth in their division.

The Rays are in the same division as the Defending World Champion Red Sox and the free spending budgetless Yankees.

The Rays have no fan base, no attendance, no lucrative TV deal, they play in an awful park and the general consensus among baseball fans was that the creation of the team was a mistake and they should be contracted.

They were the symbol of everything wrong with baseball.

Now they are the best team in baseball.

The Rays winning the division and possibly the World Series would be the single most unlikely rise to power in baseball history.

The Walt Disney Company already made a film about the Rays, but it involved a high school teacher coming in for mop up work.

A Tampa Bay world series would be too unrealistic for them…

And here we are. The Rays beat and nearly swept the mighty Angels and are on the verge of running away with the division. So much for my Cinderella scenario.

I’ll say it. I want no part of it. I want the Red Sox to pummel them. I don’t care if it looks like an Ogre beating up Winnie the Pooh. I’m rooting for the bad guy.

You can have the Wild Card… but I want that Division. I don’t care how inspiring you are!