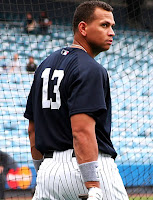 As much as it may pain me to write this...
Alex Rodriguez is probably the single most talented player I have ever seen in my life.

The only one who comes close is his former teammate Ken Griffey Jr, whom I saw as a member of the San Bernadino Spirit in 1988 and many times in the major leagues. But A-Rod is better, I grudgingly admit.

And as such a great player he is beloved by…. Whom?
Seattle fans boo him
Texas fans hate him
And Yankee fans were all ready to say “Good Riddance” after winning 2 MVPs in 4 years.

When else has such an overwhelmingly talented and larger than life player been a force in their sport and yet not be beloved by any fan base? 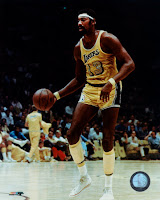 Well look to another #13… Wilt Chamberlain.

How are Wilt and A-Rod similar?
Let me count the ways

Any discussion of greatest basketball player must include Wilt Chamberlain.
He is the only player to average 40 and 50 points a season… becoming the all time scoring champion, the all time rebounding champion and even led the league in assists.

Oh yeah, he also scored 100 points in a game. The more you think of that stat, the more mind boggling it is.

And over the past 13 season, nobody has homered more, scored more runs, had more total bases or had more extra base hits than A-Rod.

Plus at age 31, was on pace to hit more homers than Bonds, drive in more runs than Aaron, get more hits than Rose and score more runs than Rickey Henderson. If he passes all of them, he would be the all time king in each of those categories.

Yet try to have any conversation with a fan about basketball and see if they put Wilt even in the top 3. And saying A-Rod is better than Ruth, Mays, Aaron, Williams or DiMaggio would get most baseball purist to burn you in effigy from Abner Doubleday’s statue.

2. Which city loves him?

Wilt played for the Warriors, 76ers and Lakers…
You would think he would be the most worshipped player in each of those franchises.

But the face of the Warriors franchise is Rick Barry. Nate Thurmond, Chris Mullin and Tm Hardaway get more love there. An ESPN listing of the greatest Warrior team doesn’t even throw a token mention of Wilt.

The Lakers? Behind Magic, Kareem, Shaq, Kobe, Jerry West and James Worthy… Wilt would be coming off the bench in the “all love from the fans” team.

But don’t say Munson. You don’t f--- with Munson when you talk to Yankee fans. 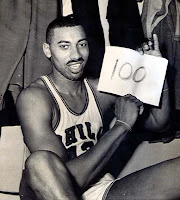 It’s hard to believe but Wilt has been criticized for piling up numbers instead of helping his team win. As if scoring 100 points in a game is hurting his team. Taking shots and making them helps… taking shots and MISSING them makes you John Starks.

A-Rod has hit 546 homers and according to Yankee fans, they have all come in the 8th inning of a 9-1 loss. 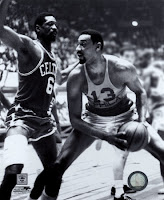 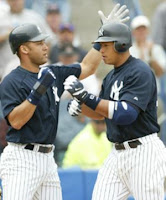 On like with stat compiling, fans have gotten over both Wilt and A-Rod for not being a winner in the post season.

More specifically they have each been compared unfavorably to a player whose stats weren’t as sexy but found ways to win in the playoffs.

Bill Russell wasn’t Wilt’s equal on the court, but his Celtics beat Wilt’s Warrior, 76er and Laker teams 7 times in the playoffs.

For A-Rod the unfavorable measuring stick was Derek Jeter. Actually the two only faced off once in the playoffs (the 2000 ALCS) but Jeter’s ability to find ways to win (a la the toss play to get Jeremy Giambi) as opposed to A-Rod’s inability to get the big play (1 run batted in in his last 15 playoff games) make the Jeter vs. A-Rod discussions very one sided… even though Jeter has only a fraction of A-Rod’s skills.

5. Nobody likes the best

Wilt was looked on as a freak of nature when he rose to power in the 1960s and he was quoted as saying “Nobody loves Goliath.” But they love when he falls.

A-Rod’s huge contract has made him a target for fans who relish booing the best player any of them will ever see.

People seem to be fascinated with their sex lives… although Wilt was smart and decided to be a lothario with remaining a bachelor, unlike A-Rod who will be shoveling over most of that $300 million contract to Cynthia.

Wilt’s stats no doubt overshadow A-Rods in this department… but considering that A-Rod shacked up with Madonna, and considering if you sleep with someone you also sleep with everyone THEY slept with… A-Rod might be closer to 20,000 partners than you think.

So there you have it…
Two of the best yet least loved players in their sports history.

Maybe it can blamed on number 13.

(Let the record show I desperately wanted to include a reference to Wilt being in Conan the Destroyer... but I couldn't do it.)