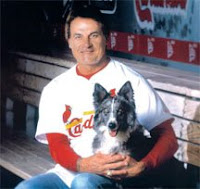 I don’t like Tony LaRussa and I’m not 100% sure why.
He’s a Hall of Fame manager… Sparky Anderson and LaRussa are the only two managers in history to win a World Series in both leagues.

Oh I admire him… but I don’t like him.

And I feel like I should like him.
My wife seems to like him, at least when I described him during the 2006 World Series.He’s a vegetarian who saves puppies and kittens.
Anyone who saves helpless animals should be liked.

But here I am not liking the guy.

Plus he got involved in local activities, like the Oakland Ballet. In fact starting when he was the A’s manager, he has performed in the Nutcracker along with other Bay Area based athletes.

As someone who was on the football and baseball team as well as drama in highschool, I love this merging of jocks and art.

It should make me love the guy.
But I don’t.

And it isn’t just because his Oakland A’s pummeled the Red Sox in the 1988 and 1990 ALCS. There are lots of people who beat up the Red Sox whom I don’t necessarily hate.

Besides, the Red Sox returned the favor when they swept LaRussa’s Cardinals in the lopsided 2004 World Series… so that should eliminate any lingering bitterness.

Is it because he is a lawyer?
My cousin Bill is a lawyer. I like him.
My friend Susannah is in UCLA Law School. I like her.


There is a joylessness with the LaRussa era.
Maybe it has to do with the deaths of Kile and Hancock or his own drunk driving.


Is it because he benefited so clearly from the steroid era having Canseco and McGwire bulk up on his watch and bringing in a roided Big Mac to St. Louis and break Roger Maris’ record?

Nahhh. There are so many people who benefited from the steroid era in ways that we will never 100% know.

There’s something about LaRussa that rubs me the wrong way…
It could be the know it all aura he has.
It could be the fact that he has made some brutally questionable moves in the post season that he never seems to get crap for.

Or maybe he has that Alan Alda in Crimes and Misdemeanors quality.
He seems on the surface like a great guy, but get to know him and he’s a sleaze.

But I don’t think I am alone on this.
This is a guy who turned three proud franchises around…

He took a 90 loss White Sox franchise and brought them to the post season for the first time in 24 seasons.

He took an irrelevant A’s team and transformed them into a powerhouse, matching the 1970s A’s with 3 straight pennants.

His first year in St. Louis he took the Cardinals to within one game of the World Series and they have remained a playoff fixture in the 2000s.

And this year, with a team many people thought would lose 100 games, he has the team in the thick of the Wild Card race in late August.

Yet is he loved in Chicago? Oakland? St. Louis?

I could be wrong, but I get the sense that Whitey Herzog is still more loved in St. Louis.

LaRussa has that Clint Eastwood in Fistful of Dollars quality.
Yeah he protects the town, but what is his motivation? Can he really be trusted?

But then again, I loved Clint Eastwood in Fistful of Dollars.

I guess I’ll never figure out why I dislike LaRussa.

Maybe some Cardinals fans can help me.

Let me ask you, Cards Clubhouse. Who do you have more affection for? LaRussa or Herzog?

Here’s a question for Mike at Stan Musial's Stance. Do you see the LaRussa era as kind of like signing a pact with the devil? And would the devil save puppies and support the local Ballet?

Viva El Birdos, do you look at LaRussa like he is an outsider? This is his 13th season in St. Louis. That’s 2 more than Herzog managed in St. Louis.

Or is it just not that complicated, Gas House Gang. He won in St. Louis. He will go to the Hall of Fame and his number will be retired… end of story.

Either way, the Cardinals are in the thick of it again and LaRussa might win yet another Manager of the Year…

And for some reason I still won’t like him