Bud Selig is in favor of using instant replay for questionable home run calls... and let me do something I rarely do:

I am going to praise Bud Selig!

Isn’t the fact that we don’t use instant replay on questionable calls border on insane. If we have the camera and the equipment, why are we relying on eyesight and judgment calls? Isn’t it the equivalent of a meteorologist saying, “I don’t need those fancy doplers and satellites… I judge the weather by a tingling in my toe!”

We have the means to fix it, but we don't. It's like using the Guttenberg press instead of a printer. Here I am hoping that my readers see the name Guttenberg and don't automatically think about Police Academy!

But if we have the technology, why not use it? This kind of logic would have had Lee Majors sitting in a wheel chair instead of spending the $6 million to fix him up!

With spectators having access to remote TVs, broadcasters with every angle at their disposal, teams with TVs in the club house and millions of fans watching the game live, often the only people on the planet Earth who don’t know they got the call wrong are the only people who have a say! It’s a warped athletic version of the Truman Show where we watch them make fools of themselves all while exuding their authority.

And who are these power mad umps and refs? They are the fat kids that the jocks used to pick on. That’s right… Chunk from the Goonies has taken control of the sport. They are probably half blind from diabetes and yet we are taking their eyesight over my HD Plasma!

Wesley Snipes’ accountant didn’t play with the rules this much!

Why should different umpires have different interpretations of the strikezone? Isn’t the strikezone in the rule book, or is it a judgement call of a 78 year old dude downing bearclaws between pitches?

I say use cameras and lasers to determine balls and strikes. How could it be worse than the debacle of the late Eric Gregg in the 1997 playoffs whose strike zone was 5 feet off the plate, 12 feet above the batters head and calling the low strike to any pitch burrowing beneath the earth’s crust to the magma. 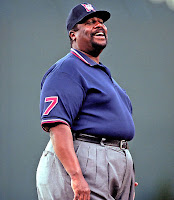 Gregg that day was loving the fact that the Miami crowd was cheering his every strike call. He literally became Leslie Nielsen in The Naked Gun! Which, for those of you keeping score at home, was the last time O. J. was intentionally funny.

The biggest opponents of instant replay are traditionalists... the same people who fought against batting helmets, play by play on the radio and letting blacks play.

These people are the Christian Scientists of sport. DON’T USE THE MEDICINE! JUST PRAY YOU GET THE CALL RIGHT!

They say "it's a slippery slope!" To what? Getting all the calls right?

They say "it will slow the game down." Have you watched baseball these days? A turtle on qualudes moves faster.

Sheen found Brando quicker than a ball game gets to the 3rd inning!

It's called INSTANT replay... not drop it off at the Fotomat and wait replay.

Does anyone go to the game saying "Oh man! I hear that fat guy is umping the game! He's FANTASTIC!?"

Who ever REMEMBERS the name of an umpire or a ref unless they screw up royally? Like Don Denkinger, whose blown call at first base may have cost the St. Louis Cardinals the 1985 World Series! You think Cardinal fans would have minded if they took the extra time to get the call right? Then again their death threats to Denkinger had such a human quality to them!