Tommy John could derail the Cardinals for a long long time 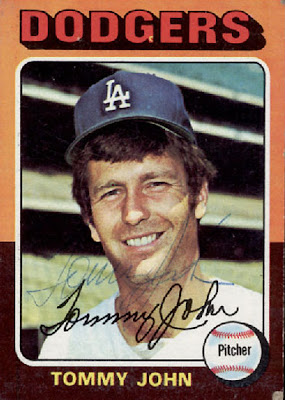 Tommy John has such a pleasant sounding name. And he had a long durable career. But wow, hearing his name is you are a pitcher must be liking hearing the reaper knock on your door.

I had already equated him with the creepy preacher in The Right Stuff.

Wainwright's season might be done with.
And with the Reds and Brewers looking strong for 2011, the Cardinals hopes to win the Division might be sliced along with Wainwright's elbow.

That would mean the Cardinals' best hope (the 1-2 punch of Wainwright and Carpenter in the rotation) would scrapped.

And with Carpenter at the end of his contract (he has an option and a buyout for 2012), he might be the best available pitcher at the trade deadline. No doubt the Yankees will be willing to pay with top prospects after losing out on Cliff Lee last year. The Red Sox would get into the mix if Beckett, Dice-K or Lackey flop. Maybe the Phillies want FIVE aces.

Either way they will get a key piece for 2012 and beyond.

But what about that beyond?
In case you haven't heard, Albert Pujols' contract is up at the end of the year, and all indications are showing he is going to be a free agent.

If the Cardinals have a flop season and wind up dealing Carpenter, would Pujols want to stick around for the rebuilding? Or would he want to reinvent himself and create a new challenge elsewhere. There will be some crazy owner who will shell out $25-$30 million a year for Pujols. He knows it. You know it.

And would you turn that down to rebuild?

Wainwright needs his elbow reconstructed.
When he won his 20th game last September 24th, little did any of us know that it could have been his last with Albert Pujols as a teammate.