The Yankees are obsessed with 2005! 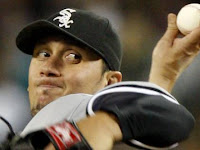 A few days ago, I wrote about how the Yankees seemed to be obsessed with signing players who were good in 2005. I mistakenly wrote that they had picked up ’05 All Star Justin Duchscherer. It turns out he was courted by the Yankees but signed with the Orioles.

No worries. The Yankees got Freddy Garcia today. Guess when he had one of his best seasons, logging in 228 innings to an ERA of 3.87, going 3-0 in the post season including a complete game in the ALCS and winning the World Series clincher?

It is an improvement. Unlike Colon and Prior, Garcia hasn’t missed an entire season!

But the 2005 fascination continues with the Yankees.