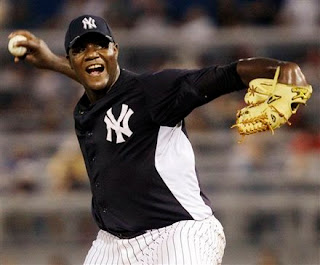 First of all, let's not get crazy about Michael Pineda's injury.
It is shoulder tendinitis. It's not like he has a torn rotator cuff or needs Tommy John surgery or his season is in danger.

And there is no way to judge the Pineda for Montero trade even at the end of this year. It will take 2 or 3 years before we know who got the best of the deal.

That being said, if I were Brian Cashman I'd be smacking my head thinking "Are you f---ing kidding me?"

His grand plan to have the Yankees become a team of good solid young pitchers has been going on since 2007. Remember when the pitching staff was going to be built on the backs Hughes, Kennedy and Joba?

That was 5 years ago.
Hughes is still around. He wasn't much use last year but evidently looked good this spring.
Kennedy is a Cy Young contender... for Arizona.
And Joba Chamberlain's career has been derailed by the team's indecisions, Tommy John surgery and his addiction to jumping on trampolines.

So now it is Hughes, Nova and Michael Pineda.
Nova has looked like crap this spring. And now Pineda is starting the season on the D.L.

A lot is riding on this for Cashman.
He sent off the player who was being built up as the next Yankee star for Pineda to kickstart his 6th annual "No, THIS time we are building a young rotation" crusade.

And here it is starting with more uncertainty.
What's the Yankees infusion of Youth?
Andy Pettitte?

All the while the Rays are overflowing with young pitching.

You had better help Pineda heals fast, Cashman.
The best trade chip has already been used.