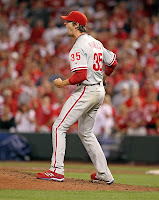 They intend to roll over the National League.

But a clinching complete game shutout is nonetheless pretty dang cool.
And RARE.

In this day and age of high paid closer, the clinching pitch is almost always thrown by the closer regardless of the situation. (The Yankees didn’t NEED to bring in Rivera the other day against the Twins.)

You might see the occasional World Series clinched with a complete game (a la Josh Beckett in 2003) or the LCS (a la Jose Contreras in 2005) but throwing a complete game to clinch a Division Series didn’t seem all that common.

So the staff at Sully Baseball looked it up, and since the Division Series became an annual event in 1995, there have been only three other times when a pitcher threw a complete game to clinch the first round. 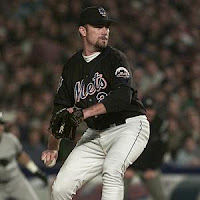 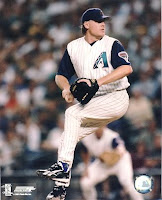 The 2001 Series didn’t end with Schilling on the mound getting the last out. The series ended with a walk off single by Tony Womack.

For sticklers of details, they played the Division Series in 1981 as well and two more complete games clinched series THAT year.

But while relievers were being used more frequently then, the whole specialization of EVERY bullpen role (and the cheapening of the save) didn’t come around until the late 1980s.

So Cole Hamels has a complete game clincher to go along with his NLCS MVP, World Series MVP and World Series ring.

And gets to join select company.