Are the Yankees insane? 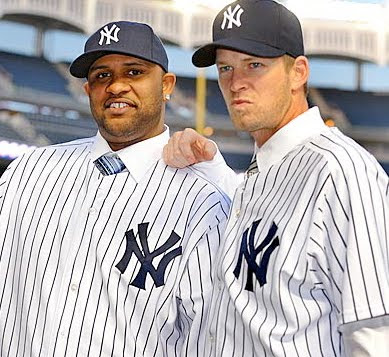 Let's say you are organizing the entertainment at a casino.
While putting the line up of shows together, you realize that you can have Frank Sinatra perform three nights... but you say "Nah... we only want Frank for two nights. We need to save his voice, so we'll book Steve Lawrence instead for a night."

Chances are someone would break your legs or at least call you an idiot.

That's basically what the Yankees are doing.

They have that most valuable of commodities... a legit ace in C. C. Sabathia. He's an innings eater (and a Subway sandwich eater) and can take the ball over and over again (remember his tour de force complete game marathon for Milwaukee at the end of the 2008 season?)

And there is no danger of the Yankees running him into the ground like the Brewers did that season. He's thrown 6 innings since September 28th.

He's ready to throw game 1. And the Yankees should line up their rotation to get Sabathia throwing as often as he can against Texas. Have him throw Game 1, Game 4 and OF COURSE Game 7.

I thought that was a no brainer. He is Sinatra in this scenario.

And evidently the Yankees have other plans. 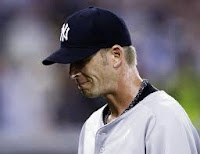 Girardi will start him Game 4.

He is Steve Lawrence in this analogy.

And what about Game 7? The potential do or die game for the pennant... the one where the Rangers will inevitably throw Cliff Lee...

They intend to give the ball to Phil Hughes.

A nice pitcher. A good pitcher. A pitcher who has been up and down recently.

And the Yankees are putting themselves into a potentially bad situation with their pitching staff in the ALCS.

They have the clear advantage in game one between Sabathia and C.J.Wilson.
The Yankees also have the edge in game two between Phil Hughes and Colby Lewis, but it isn't a sure thing.

Then their proposed Game 3 has Andy Pettite against Cliff Lee. OVERWHELMING advantage to Texas.

Then A. J. Burnett will throw Game 4.
Does it even matter who Texas is pitching? They have the advantage in Game 4 as well.

In other words the Yankees have set up their pitching staff to give Texas obvious advantages in Games 3, 4 and 7.

All because they don't want to use Sabathia 3 times. If they did use him 3 times, the Yankees would have the clear advantage in Games 1 and 4 and set up an ace versus ace Game 7.

The Yankees should throw Sabathia in those 3 games.
If they MUST throw Burnett, why not use him in Game 3 against Cliff Lee? Consolidate the pitching match ups that favor the Rangers into one game.

Have Pettite go Game 2 with Hughes coming out of the pen.
Have Hughes start game 5 and Pettite start game 6 on regular rest.

This is not a second guess. I am writing this on Wednesday and the series starts on Friday.

I am clearly NOT rooting for the Yankees to win. I would love to see this rotation explode in their face.

It just strikes me odd... they aren't putting their best team on the field.
They aren't booking Sinatra.
Ah well... I guess Girardi is saying "I'll do it my way!"