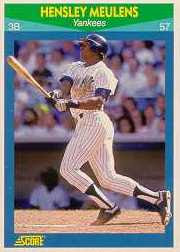 It's very easy to be a Yankee fan now.
They've won a ton of titles and are almost always playing in October. They are THE marquee franchise and virtually every huge star passes through the Bronx.

Celebrities are at the games and the new Stadium is the crown jewel of baseball.

20 years ago... that wasn't the case. For some people who are young fans or casual fans, this might be something startling to hear... but the 1990 Yankees were THE WORST TEAM IN BASEBALL.

I was there. It was my first year living in New York. And you couldn't even get mugged in Yankee Stadium (but lord knows you could all around the neighborhood.)

25,000 was considered a great crowd. Nobody knew the players nor cared about the team. And there were rumors they would move to New Jersey or along the West Side of Manhattan.

And their minor leaguers sucked. Their free agents were busts. And the managers kept changing.

If you were a fan of the 1990 Yankees, you were the ones who cheered the loudest in 1996... You were the fans who truly savored the Torre years and the subsequent titles because you saw Yankee baseball at its worst.

And if you were one of those fans... trudging to Yankee Stadium to see Tim Leary lose 19 games... you should be rooting for the San Francisco Giants to win the National League Pennant.

The three players who best symbolized the 1990 Yankees are currently on the Giants coaching staff.

Hensley "Bam Bam" Meulens... the very symbol of over hyped Yankee prospects... was on that 1990 team.

Roberto Kelly... the Yankees token All Star and supposed hope for better times before he was dealt for Paul O'Neill... was on that 1990 team.

Yeah that team stunk. But if you went to even ONE GAME that year, you never have to prove your loyalty again. And if someone calls you a bandwagon jumper, you can say "Hey! I was there cheering for Bam Bam Meulens!"

That 1990 team was a good barometer for true fandom.
That awful team deserves a salute in its own way.

So in the NL, cheer for the Giants. Their coaches stunk it up so the World Series nectar could taste sweeter.