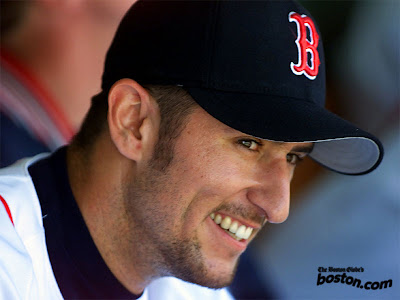 I have a hunch that Nomar Garciaparra has probably played his last game in the big leagues.

He hit for a decent average last year in Oakland, but with very little power and he of course got hurt. And he can't play the field.

I can't speak for every GM, but I can't imagine too many wish lists include "A punchless injury prone DH... who is right handed."

Nomar went 2-3 with a run scored and struck out in the 8th in his final at bat.

Every year the free agent market plays a very cruel trick on a number of players. Their contract runs out and they see other players sign with other teams... and like a brutal game of musical chairs, spring training rolls along without an invitation.

And they find out their career has ended because nobody wanted to sign them. No farewell tour. No bows. Just a phone that doesn't ring.

Last year players like Ray Durham found themselves scrambling for a seat.

The year before Kenny Lofton and others saw productive careers unceremoniously end.

Even Hall of Famers like Rickey Henderson and Steve Carlton saw their careers just fade away, and not on their terms.

And now it seems like Nomar is the latest player whose career will probably end because nobody wanted him.

But let's not forget how great Nomar was...
For 6 out of his 7 full seasons in Boston he looked like he was going to be one of the great figures in Red Sox history.

He came out of the gates blasting, hitting a homer in his first at bat as a call up in 1996.
He was the 1997 AL Rookie of the Year and with Mo Vaughn put together an MVP caliber 1-2 punch that looked like it was the foundation of a potential World Series winner.

And in the playoffs, he homered 3 times in 4 games,driving in 11 and posted a slugging percentage of 1.000 in the Sox loss to the Tribe.

In 1999 the Sox were supposed to take a big step back when Mo Vaughn left for the Angels. But Nomar (and Pedro) carried the team on their backs. Nomar became a batting champ and continued to put up power and run producing numbers. His OPS rose to 1.022 and again he produced big in the Division Series and also the ALCS against the Yankees.

In 2000 he won another batting title and was intentionally walked a league leading 20 times.

At that point he was approaching legend status.
His first name was a rallying call for Red Sox fans. Just scream "No-MAH!" and you knew you were amongst friends.

As if his first name wasn't enough of a challenge for Native New Englanders, try Gah-Cee-Ah-Pah-Rah!

He was the heart throb before Johnny Damon (and the pink hats) started showing up.

He was the Red Sox answer to the shortstop debate of the late 1990s/early 2000s. Jeter was the winner, A-Rod the best all around player, Vizquel the best defender... but Nomar was the best hitter.

And he got what it meant to play for the Red Sox. He got close with Ted Williams, knowing that if all went well, number 5 would hang on the right field facade.

When he came back from a injury plagued 2001 season to regain his All Star stroke in 2002, it looked like he was going to lead the Sox to the promise land... especially after the Yawkey family finally gave up control of the team. In fact going into the last month of 2003, Nomar seemed like as good a choice as any for AL MVP... and the team looked destined to win the AL Pennant.

If you stopped time right there in September of 2003 and I told you the Red Sox were going to win the World Series in 2004 and 2007, you would only assume that Nomar was not only going to be on the team... but be one of the heroes.

If I told you that the trading away of Nomar was going to be the turning point of the 2004 season for the better because injuries, the botched trade of Nomar in the off season and his souring attitude made dealing him imperative, you'd commit me to an insane asylum.

If I told you then that he had only one All Star caliber year left in him... and that would be as a first baseman for the Dodgers in 2006, you would say "Yeah right. And Johnny Damon is going to the Yankees!"

Alas Nomar won't be among Yaz, Williams or Rice.

His legacy will be more like Fred Lynn or his teammate Mo Vaughn... an MVP while with the Red Sox but whose post Boston career literally limped along with injuries.

So let's forget all of that now.

Let's just go back and remember Nomar right up until his slump at the end of 2003...
Let's freeze him in time and remember the charismatic player who wanted to win in Boston so badly.

If his career is over, I hope Francona hires him as a coach. If the Sox ever win another World Series, it would be nice for him to be on the field as a champion.

And maybe he and Mia can have a boy one of these days that the Sox could sign.

But don't think of him sulking in the dugout while Jeter flew into the stands in 2004.

Think about the post season homers and the clutch hits.

And think of those crazy tics and rituals in the batters box, tapping his feet and pulling at his gloves.

Come on... you used to imitate him. Admit it.