Making Macaroons while the baseball world is turned upside down 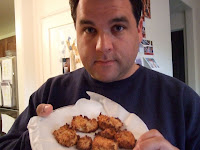 Last night was one of those "race to ESPN and get an update" nights that I love in the off season.

Actually these days I race to the MLB Network and have my web browser open.

But last night was a little different. My wife was making macaroons for our kid's teachers... and she was tired... and needed her husband to take over and cook them.

Fine. Wifey went upstairs and a dutiful husband went to dolloping coconut mixed with apricots onto a baking tray... all the while trying to making sense of the upheaval that was happening in the world of baseball. 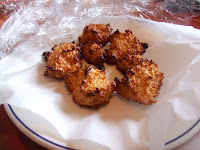 Now I have been wrong about Red Sox moves before.

Remember I loved the Eric Gagne trade when it first happened.

But I love both of these moves. The Red Sox made their rotation stronger with a "Don't F--- With Me" stud. Granted I don't think he is a true #1 ace... but with Lester and Beckett still hanging around he doesn't have to be.

Any rotation that starts with Lester, Beckett and Lackey is going to win a lot of 3 game series.

And also guess what?
He's not going to the Yankees!

Meanwhile Mike Cameron is a nice player. So is Jeremy Hermedia. Together they will probably hit a little and field a little. There is no need to over pay for a Jason Bay or a Matt Holliday.

Besides, next year there will be no Ortiz, Varitek, Lowell nor Beckett on the books. There are some big fish available... best not have Bay locked up for his declining years!

(Also Bay leaving town means they get the picks lost from the Lackey signing.)

All in all a good night for Red Sox fans. 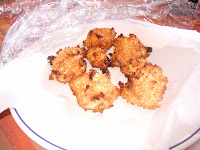 THE PHILLIES FINALLY LAND ROY HALLADAY... BUT WHO GOT WHAT? AND DID THE PHILLIES PAY TOO MUCH?

First let me get my petty Red Sox fan perspective out of the way first... I am so relieved that Halladay is completely out of the AL.

He is not a Blue Jays, he is not a Yankee, he is not an Angel... all which bodes well for the Red Sox new revamped rotation.

OK, on to the trade.
I THOUGHT I understood what the Phillies were up to.

I THOUGHT the Phillies were basically saying "Hey! We don't know how much longer we have the whole Howard/Rollins/Utley team together... so let's try to get Halladay in here, have the best team in the NL... have the best chance at three straight pennants in Philadelphia since the days of Connie Mack... and go into the World Series with Halladay and Lee going 1-2."

Then I heard Lee was involved in the trade.

Hmmm, I thought. Well I guess the Phillies figured they didn't want to part with some of their prospects like Kyle Drabek or Michael Taylor.

Then I heard they were sent in the trade too.

But they get some minor leaguers back from Seattle.

What in the name of Pete Incaviglia is going on in Philadelphia?

Is this a lateral move?

They start with a Cy Young caliber ace leading a questionable rotation and have some good prospects.

They finish with a Cy Young caliber ace leading a questionable rotation and have some new prospects.


Yes, I know that Halladay is now locked up to a long term contract and Lee’s deal was done at the end of the year… but this wasn’t about avoiding a negotiation.

And wouldn’t it have made more sense to drag this out? The Mets and Twins dragged out the Johan Santana trade until the Mets basically got a bargain. And no offense to Halladay, but Santana is a better pitcher.

And now, they made their big deal and seem to be in the same place.

Notice I didn’t write “they made their big move.” The Phillies haven’t moved anywhere.

Oh the Mariners have… they trade three minor leaguers and got a second ace. That’s what the Phillies should have done.

Even one season of Halladay/Lee would have been worth it.

Meanwhile the trade is so complicated and involves so many parts that I had to make sure that I wasn’t involved some how.

Now Oakland is involved according to Buster Olney, who has no reason to lie.

Brett Wallace, the prize in the Matt Holliday deal, will be shipped off to Toronto. In the end the Jays snagged a top pitching prospect, one of the top hitting prospects in the game and a solid minor league catcher. A potentially great haul, and no doubt better than two draft picks.

HEY J. P. RICCIARDI! If you could have pulled that off last summer, you’d still have a job! 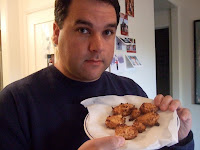 THE LUNATICS WERE OUT ON WFAN!


While baking the macaroons, I listened to WFAN streaming on my computer. I was the biggest WFAN addict in New York and man it was great listening to the always brilliant Steve Somers calm down Met fans looking to jump off the edge.

The Shmoozer was his usual smooth and borderline condescending self, especially when dealing with the callers who kept saying “The Mets Have No Heart!”

Somers would counter “What is more likely is they have no TALENT!”

The handful of Yankee callers complaining about Hideki Matsui leaving cracked me up.

“We’ve GOT to keep Matsui!”
Somers would ask “WHERE WOULD HE PLAY?”

Of course there is nowhere. He’s gone and wouldn’t be the first World Series hero to find a new address the next year. (John Wetteland anyone?)

If there is a more insane gathering of irrational sports fans than late night on WFAN, then I can not imagine it. And no better keeper of the insane flame than Somers.