Does Brian Cashman realize that this is the SAME Javier Vazquez?

The other day the Yankees, showing their commitment to developing their own players, shipped off Melky Cabrera to Atlanta for Javier Vazquez.

Now this is undeniably positive for all of baseball because that means we will be spared hearing John Sterling say "The Melkman Delivers!" and THEN say "It's the Melky Way!"

That was too much to bear.

But the deal is unusual for another reason...

Vazquez was in the Bronx before. In fact his last game was kind of a big one in the history of the Yankees and of the Red Sox as well.

Do you think Cashman knows that this is the same guy?

Did Atlanta GM Frank Wren keep that little nugget of information from him?

CASHMAN: Man, I am really excited to get this great pitcher Javy Vazquez from you guys. The guy was a Cy Young candidate!

CASHMAN: Man, it is strange. We used to have a pitcher who had the same name.

CASHMAN: Yeah. He had a world of talent but he folded like a lawn chair when the pressure of New York got to him.

CASHMAN: Yeah, he was supposed to be our young ace. He started off OK but then by the time the playoffs came around he was in the bullpen. 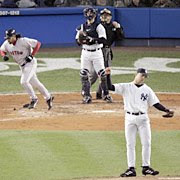 CASHMAN: You don't know the half of it. In Game 7 of the 2004 ALCS, we brought him in to stop the bleeding because Kevin Brown was leaving a stain in the bed that matched his last name.

WREN: How did YOUR Vazquez do?

CASHMAN: First pitch he threw to Johnny Damon was a grand slam. And 2 innings later he let up ANOTHER homer to Johnny Damon... killed our pennant chances.

WREN: Wow. He sounds like he was a terrible fit in New York.

CASHMAN: Yeah. But your guy sounds like a bulldog.


I've already equated Javier Vazquez with a comic who is coasting on a good early set.

But now he's going back to a comedy club where he bombed big time.

And the Yankees oddly are going back to the well of bringing in NL pitchers, because that worked so well with Kevin Brown, Randy Johnson, Carl Pavano, Jaret Wright... and oh yeah Javier Vazquez!

Of course this trade opens up left field and a chance to bring back Johnny Damon (you know... because they are trying to get younger and more athletic.)

If Damon comes back, do you think he'll chat much with Vazquez?

"Hey Javy? Remember when you served those two meatballs to me in the '04 ALCS? Thanks!"

Cashman would interrupt him.

"You are wrong Johnny... it's a totally different guy. Frank Wren told me so." 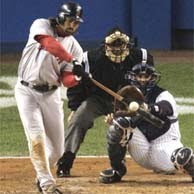