A VICTORY FOR SMALL MARKET TEAMS... sort of 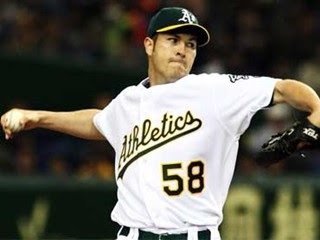 Lots of people lament during the off season that big market teams (the Yankees, the Red Sox and the Mets) sign all of the big free agents and small market teams like the A's can never retain their All Stars.

Well the times are a changin' again!

Didn't you hear? The Oakland A's reached deep into their pocket books and re-signed a 2 time All Star and kept one of their own in the fold!

That makes up for losing Reggie Jackson, Jason Giambi, Johnny Damon and Miguel Tejada, doesn't it?

OK, hands up if you knew Duchscherer was a ONE TIME All Star, let alone two!
I am guessing not a lot of hands went up.

No player since Scott Cooper has taken advantage of the "Mike Sharperson Memorial All Star Award" better than Duchscherer.

Lord knows none of his TEAMMATES would be at the game.

And oh yeah, the two time All Star missed ALL of 2009 with back problems and depression. So the only way Oakland can keep their All Stars is if they are broken down physically and chemically.

With Duchscherer back, maybe I'll pick the A's again!