THE YANKEES ARE UNDERRATEDLY SENTIMENTAL

Well one of the residual effects of the bewildering Javier Vazquez for Melky Cabrera deal is it opens up left field again… and there is speculation that it was done do retain Johnny Damon… even though he’s 35 years old, his defensive skills are eroding and he already did what he was supposed to do (help lead the Yankees to a World Series title.)

Why would you sign him to a long term deal when he will clearly break down by the end of it? And sacrifice a talented outfielder (Melky)10 years his junior? And sacrifice that outfielder for a pitcher (Vazquez) who in 12 seasons has had 3 good ones and a meltdown in New York?

Because the Yankees are sentimental! 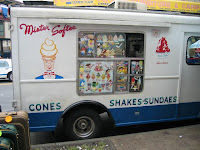 People refer to Yankees as the Evil Empire (and by people I mean Larry Lucchino.) But a more appropriate name would be Mr. Softee.

Look at all of the people who come back for second acts as a Yankee (think Andy Pettitte, Joe Girardi, Nick Johnson and even Javy Vazquez). And how often they keep their own veterans around (Jeter, Rivera and Posada are all still there.) And when one player leaves (a la Matsui) Yankee fans cry about how they should have kept him.

Everything about the Yankees is sold on a bit of sentimentality.

Whether it is showing the clip of Lou Gehrig declaring himself the luckiest man on the face of the earth, or showing clips of Thurman Munson or pining for Ruth, Yogi or Mickey, the Yankees are always sold on mushiness.

Watch any Yankee highlight film or any Yankeeography on YES. They make Love Actually look as mean and gritty as a Scorsese film.

They are running out of numbers to retire and their Old Timers Day is a lovefest like no other in baseball.

They spent a billion dollars to make a stadium that looked like the OLD stadium (instead of the perfectly good and profitable stadium they were using.)

Now contrast that with the Red Sox, who are usually portrayed as the more emotional and sentimental franchise. Look at all of the players they just set adrift the nanosecond their skills start to erode.

And so many greats leave Boston on bad terms that I could write up a 25 man roster of players in my lifetime whose left Fenway in a huff. (And it looks like Mike Lowell might be the next one on the list!)

But not the Yankees… even the guys who DO leave angry (Yogi, Reggie, Goose) are brought back as Prodigal Sons.

And now it looks like Johnny Damon might be the latest one to come back… and technically he hasn’t even left.

And the Yankees start a brand new century looking very similar to the last.