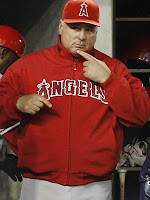 Lackey is gone… so is Figgins… and there goes the final two players from the 2002 World Champion Angels.

With the arrival of Hideki Matsui, that also means the end of Vlad Guerrero’s run in Orange County. (Not Los Angeles… Guerrero never played in Los Angeles.)

The Angels must be in a state of shock… and one that Jason Bay can’t revive them from. Oh they will still be a competitive team, but their wonderful run in the 2000s (6 post season appearances, 5 Division Titles, 3 trips to the ALCS and the 2002 World Championship) looks like it might be drying up.

They had a mess of young talent but they also held on to some players for just too long. (I wonder what the Dallas McPherson’s of the world could have fetched at the trade deadline when thttp://i2.cdn.turner.com/si/2009/writers/jon_heyman/10/18/sunday.scoop/mike-scioscia.jpghey always seemed to stay pat.)

Mike Scoscia has had a borderline Hall of Fame career as a manager as it is now.

If he brings another Angel team to the World Series, it will have 100% turnover from his first title team.

If he does THAT, then his place in Cooperstown is secure.