The Brewers Statement: We are NOT Kansas City (nor Pittsburgh for that matter) 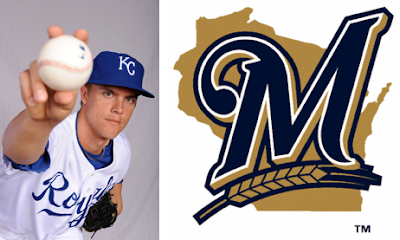 When the Royals traded Zack Greinke to Milwaukee the other day, there was a beautiful symbolism to the move that wasn't lost on me.

Greinke wasn't dealt to New York. Forget the spin of "He couldn't handle New York." Neither the Mets nor the Yankees have the prospects to have pulled off the trade.

He wasn't dealt to the Red Sox, Phillies, Cubs, Angels or Dodgers.

Instead of sending Prince Fielder packing and looking to rebuild, the Brewers are going for it and adding a Cy Young contender.

And with that trade, the Brewers are doing something I've been urging the Pirates to do for a while and will pretty soon may encourage the Royals to do the same thing.

Go all in and give your fans a reason to be excited.

There is a reason I am bringing up the Pirates in this post about the Royals and Brewers.

From when the Wild Card era began in 1994 until the end of the 2006 season, the Pirates, Royals and Brewers combined for 34 losing seasons out of 36.

And those three teams became the symbol of everything unfair with baseball. Their revenue was so much lower than the big spenders... how could they POSSIBLY compete?

This of course ignored the fact that low revenue teams like the Marlins could win the World Series twice in that stretch. And ignoring the fact that contraction worthy teams like the Twins and the A's could be playoff regulars. And the Expos, despite having no owner nor ANY fanbase managed to contend into September in 2002 and had a winning record in 2003.

Those three teams kept building for a future that would never arrive.

And the mantra of Brewers owner and commissioner Bud Selig (no conflict of interest there) was to change the economics of the game to help teams like his own.

Well, a wonderful thing happened to the Brewers: The Seligs sold the team.

Sometimes that's what you need. A change at the top could lead to changes in the whole culture of the team. Remember how the Red Sox couldn't win the World Series all of those years? From the mid 1930s to 2002 they were owned by the Yawkeys.

2 years after they sold the team, they were the World Champs.

After years of putting a losing club on the field under the Seligs, the Brewers finished at .500 in 2005, their first season under Mark Attanasio's ownership.

By 2007 they had a winning record and contended into September for the first time since 1992.

And in 2008, they did what would have been unthinkable just a few years before and would be sacrilegious in Pittsburgh and Kansas City: They dealt away one of their major league ready prospects for a veteran who was on the verge of free agency.

And even if Matt LaPorta turns into a good player for Cleveland... and even though CC Sabathia bolted town the second the season was over... it was the right move for the Brewers.

Sabathia pitched his heart out in his cameo for the Brewers. And when he pitched a complete game on the last day of the season, propelling the Brewers into the playoffs for the first time since 1982, he did something that no prospect could EVER do:

He gave Brewers fans too young to remember Harvey's Wallbangers or the great start of 1987 an actual awesome baseball memory of their team.

And guess what happens when you give fans a wonderful feeling about rooting for their team?

You build a FAN BASE!
You get excitement for your team instead of apathy!

Young kids in Wisconsin experienced a thrilling season and even a post season win at home in the Division Series. There isn't the hum drum "What's the point of watching them. They NEVER win" attitude.

And those fans who experienced the fun of 2008 have added hope in 2011. A new manager, a powerful lineup (with or without Fielder) and a rotation that now features Yovani Gallardo, Shaun Marcum and Zack Greinke.

Meanwhile the Royals got more prospects and continue to promise their fans that happy days are just around the corner.

The Brewers aren't playing that game, at least not now.
They are going for it and saying to their fans "We want you to have more good memories of your team."

All it took was a change in attitude (and getting the Seligs out!)