Carl Pavano and the American Dream 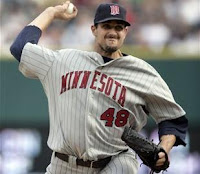 Has there ever been a player in baseball history with better timing than Carl Pavano? It’s staggering if you think about it from a certain point of view.

If I turned the clock back just two years and mentioned Carl Pavano’s name, it would be a baseball punchline.

He was a washed up bust who collected tens of millions of dollars while not even going to work.

His career was over and he was a disgrace.

Now look at him.

After reviving his career with the Indians and the Twins, he is currently the biggest pitching free agent NOT named Cliff Lee.

And if he waits until Cliff Lee signs, then he will be able to have a feeding frenzy from the other teams that need a starter.

He could EASILY command $10 million over 3 years… maybe even 4 years… based upon the market.

Now there is something very startling when you take a look at his stats. He has had two very good years in his 13 years in the bigs and a bunch of either mediocre or bad seasons.

He had a great season in 2004, his last with Florida. And he had a terrific season last year with Minnesota.

And he will probably parlay those two good seasons into two contracts of $30 million or more. He managed to time his first foray into free agency in 2004 when the Yankees and Red Sox were at the peak of their “take no prisoners” off seasons. 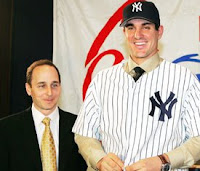 And Pavano, a New England native with Yankee fan parents, was one of the many prizes of free agent market. Both teams coveted him. The Yankees out bid the Sox and if Pavano ever has great grandchildren, their college tuition is already paid for.

And now a free agent again will have his value inflated by teams that need some consolation for not getting Cliff Lee.

(How awesome would it be if he rejoins the Yankees?)

So how about THIS for the American dream?

Carl Pavano got to play big league baseball.
He got to be an All Star.
He got to pitch in the World Series and win a ring with the 2003 Marlins.
He will earn more than $60 million playing baseball.

And for three of those years he sat home, didn’t go to work and deposit millions of dollars in the bank.

Isn’t that what most Americans want?
Work for a quick spurt and watch the money come in!

And Pavano adds two other twists to the whole dream life he is living.

He could have gone on a spending spree that would put Tony Montana, Montgomery Brewster and Navin Johnson to shame. He could have spent all $39 million of his contract and guess what? It’s being replenished!

It is safe to say that there will be a quality party at the Pavano home this off season.

And of yeah one other element to his American dream. He was involved with Alyssa Milano.

You may hate him, Yankee fans… but you’d trade lives with him in a heart beat.