Rolando Roomes - Another random card found in my old closet 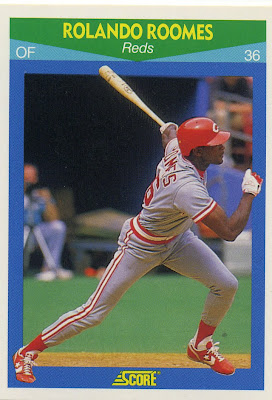 Going through the same box of baseball cards in my old closet, I pulled out this "Score" rookie card for Cincinnati Reds outfielder Rolando Roomes.

Let's face it, he had one of the coolest names in baseball. Shouldn't someone whose name has an alliteration as well as a bad ass first name like Rolando be a star? The P.A. announcer should relish saying his name every time he comes to bat. "Rolannnnnnnndoooooooo Rooooooooomes!"

Alas, it didn't work out that way.

Roomes is one of only four players to be born in Jamaica to play in the big leagues. Chili Davis and Devon White came before him. Strangely enough Justin Masterson was the fourth. I don't think of him as a Caribbean player.

Unlike the baseball crazed Caribbean nations of Domincan Republic and Puerto Rico or Cuba, Jamaica is a cricket first country. And Roomes was indeed a cricket player.

He came up through the Cubs system, blossoming in 1987 with Pittsfield. By 1988 he was in Wrigley. He played in April and September with the club, but was used mainly as a pinch runner. In the off season he was sent packing to Cincinnati for Lloyd McClendon.

He played in that awful Reds season that was plagued by the Pete Rose investigation. Roomes made the most of his situation, however. Ken Griffey Sr, Paul O'Neill and Eric Davis all had injury issues and Roomes managed to play in 107 games. And he did well enough to have Score baseball cards declare him a "Promising Rookie."

His best moment came on May 26th when he returned to Wrigley Field. In the 7th inning, Roomes hit an RBI double off of Jeff Pico to give the Reds the lead. But John Franco let up a game tying double to Gary Varsho in the 9th.

Undeterred, Roomes faced Calvin Schraldi in the 12th inning and hit a 2 run homer to give the Reds the lead for good. He seemed determined to win that game in Chicago.

Oddly Schraldi was in his FOURTH inning of relief. It was a strange decision for the Cubs manager to leave Schraldi in for four innings... until you realize that the Cubs manager was none other than Don Zimmer.

By the way, Schraldi was brought into the game after Pico was pinch hit for. Who was the pinch hitter? Lloyd McClendon. It all comes full circle.

Roomes played for the 1990 Reds as well, but sadly for him was let go and signed with the Expos before their push for the World Series.

He never played in the big leagues again after the 1990 season.

But he had a card.
And that card was in my old closet.

Where ever you are, Rolando Roomes, I hope you are enjoying life... and playing cricket.