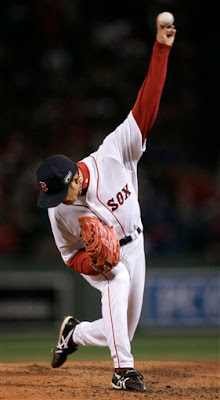 The Red Sox non tendered Hideki Okajima the other day, thus ending his 4 year run in Boston. It was probably time. He had a mediocre 2010 and pitchers in their mid 30s tend to not improve over the years.

But before he goes off (and as a left handed reliever will inevitably find work) I ask my fellow Red Sox fans to tip their hats to him.

Remember this was the guy who was basically supposed to be Daisuke Matsusaka's caddy. A fellow countryman to keep the new ace company.

When he let up a homer to John Buck on the first pitch he ever threw, it looked like Okajima was Japanese for "Bust."

And he had that bad ass delivery where he literally wasn't looking at the batter as he pitched. I have no clue how that worked... but it did.
His ERA was 0.42 in late May.
By the All Star break it was 0.82 and he was voted in by the fans (presumably by Red Sox Nation and the Nation of Japan) to the All Star Game.

As late as August 8th, his ERA remained sub 1.
Then his arm started to tire and the league caught up with him.

Theo and Tito rested him for a few weeks so he would be fresh for the playoffs... and he delivered.

He was unscored upon in the Division Series and ALCS, pitching 2 key innings in Game 7 against Cleveland.

Then, in the second game of the World Series, in a tense 2-1 victory, he pitched 2 1/3 perfect innings striking out 4.

He looked like a potential MVP candidate before letting up a homer in Denver. But he was a key player for the 2007 World Champs.

So off he goes to begin the journeyman part of his career. But thanks Oke-Doke. You combined with Papelbon in 2007 to give the Sox one of the best 1-2 bullpen punches in Red Sox history.