Give the Rockies credit... they give their fans players to cling to

You are going to hear a lot of mixed opinions about Troy Tulowitzki's long term contract extension with the Rockies.

Jeff Passan has already chimed in on Yahoo. The panel on MLB Network is split on it. (John Hart pointed out what a no brainer Grady Sizemore's super stardom looked like.) And more will come down the pike.

And yes people are pointing to the Rockies rotten contracts for Mike Hampton and Denny Neagle, but those are disingenuous comparisons. They overpaid for them to lure some pitching into Denver and as it turned out, they were both bad fits. (Although Hampton liked the schools and Neagle liked the women in his car.)

You will hear Todd Helton's name being thrown around as a lousy contract as well. And I suppose technically it wasn't a great one. It was an albatross for a bunch of years and by 2006, they would have dealt Helton for flat Diet Sprite. 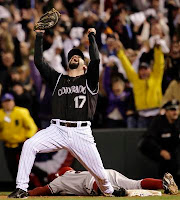 But a very cool thing happened the next year.
The Rockies went on their amazing run and stunned everyone on the planet Earth by sweeping Arizona and storming into the World Series.

And the last out was recorded by Helton.

The Rockies had a bunch of players most fans had never heard of. But they had Helton, who might not have been the superstar he was when he signed his bear of a contract. But he was the steady player whom any baseball fan knew and could relate to Colorado.

And that is something that all the stat heads in the world will NEVER understand. Sometimes for a fan base, it is GOOD to have a steady reliable player that the fan base can point to and say "That's my guy!"

Helton was that guy on the 2007 Rockies. Who knows? If the Blue Jays make the playoffs, Vernon Wells and HIS brontosaurus of a contract might have a similar reaction to Helton in the '07 ALCS.

It is why I totally understood the Ryan Howard contract. Lots of people killed it, but I got it. Sometimes you need to put OPS+, VORP, WAR and everything else and put it on the shelf.

Howard the Phillies fan's guy. He delivered for them with those towering homers in the 2008 World Series and as the 2009 NLCS MVP. He was a World Champion and an MVP for the Phillies... and you don't have to worry about him going to New York or Chicago or Boston. The long term contract gave the fans license to get attached to him as a Phillie.

And besides, how do you know if an Adrian Gonzalez or whomever else would be able to produce in Philadelphia or be as loved by the fans.

Sometimes to build up a fan base, regular fans need to have fan favorites to root for. Not everyone is watching the game with a calculator in hand. Some people (and brace yourself here) root for the PLAYERS. Some people like having a player to cheer for through thick and thin, and not drop them from their Fantasy Team because their Base Out Win percentage dropped.

Yes it involves emotion, but not all baseball fans are Vulcans!
Some fans have been stung by departing players and want to know if this is a long term relationship or just a fling.

I wonder if the Marlins would have a bigger fan base if some of their World Champions were able to stick around. I wonder if Padres fans would have shown up at the park this year if they felt like the stars they were cheering for would actually come back in 2011.

So guess what Rockies fans... you can buy a Tulowitzki jersey and know it will be good for a while. In the age of free agency, spending 10 seasons in a smaller market is really all you can ask for.

Todd Helton has given Colorado fans 13+ seasons.
Tulowitzki could spend 14+ seasons in Denver if the contract runs through all of its options.

Either way there will be many Rockie fans who could point to Todd and Troy and say "They were MY GUYS."