Rest in Peace, Red the Fish 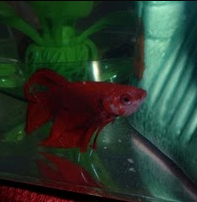 Today we lost our fish, Red.
My son Aidan named him. He took one look at him and said "He's red. So his name is Red." And how is that less of a creative name than "Sully."

Before the 2010 postseason, I held up a logo of a baseball team on either side of his tank. Whichever side he swam to, I wrote down as his prediction.

Well, now he is gone... flushed to the great unknown.

You were a good fish, Red. We'll miss you. And you were a hell of a lot better at picking playoff series than me.