The Cubs traded Carlos Zambrano? Theo is earning his money 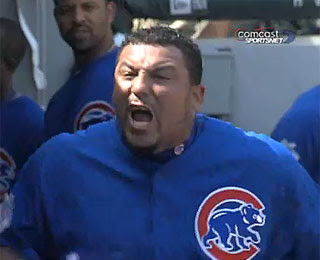 A year ago I lumped Carlos Zambrano in a "trade trash for trash" deal scenario with the Mets. I felt that a guy making $18 million per year who needed anger management and had to be regulated to middle relief duty while hitting 30 wouldn't fetch much on the trade market.

And today not only did Theo deal Zambrano, but he actually got a 25 year pitcher with 4 years of big league experience under his belt. Chris Volstad already has a 12 win season on his resume and doesn't have Zambrano's "has he lost his God Damned mind?" baggage.

Good move Theo. He needs to tear the Cubs down to the ground and build it up. And what better way than to say "The bad contracts are out and young kids are in"?

Yeah the Cubs will have to pay for a big chunk of his contract but hey! I thought they were going to have to take junk back for him.

A title with the Cubs might not come as quickly for Theo as it did in Boston... but if flipping Zambrano to Volstad is any indication, it will eventually happen in Chicago.

(You know... just like it was going to happen with Leo Durocher, Dallas Green, Dusty Baker and Lou Piniella.)