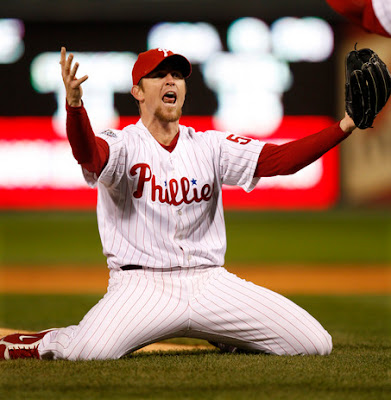 Brad Lidge signed today with the Washington Nationals, joining his former teammate Jayson Werth. I guess the Nation's capitol is where Phillies champions go to cash in.

I am not saying the Phillies should have retained him. They took away my club's closer in Papelbon and it was was probably time to say good bye in Philadelphia.

I've had a lot of fun at Brad Lidge's expense over the years.

Heck I have talked about his deal with the Devil.

And yes he gave the Phillies headaches throughout 2009 and lost that key Game 4 of the World Series.

But Phillies fans... say good bye and salute the man.

Don't focus on his bizarre and grotesque 2009. Don't bring up the Pujols homer, the Podsednik homer and losing 2 games in the 2005 World Series and his horrible last 2 years in Houston.

Remember Lights Out Lidge.
Remember how he arrived in Philadelphia basically as a reclamation project in exchange for Michael Bourn and he turned into the closer the Phillies were searching for.

Remember how he went a perfect 41 for 41 in save opportunities in the 2008 regular season.
And then remember the 7 for 7 he went in saves for the post season, including the glorious moment of striking out Eric Hinske to win the World Series.

Also remember that despite being dreadful in 2009, Lidge closed out both the Division Series and clinched the National League pennant, picking up 3 saves and a win before his World Series meltdown.

For many Philadelphia fans, Lidge's strikeout of Hinske was the first championship they experienced in their lives. Using my "You don't follow a team until you are 7 years old" formula, any Philadelphia fan 32 years or younger had gone their whole lives without seeing one of their teams winning a title.

Now? They've got a Phillies World Championship. And they would not have made it past the Mets, Brewers, Dodgers nor the Rays without the anchor in the bullpen.

The lights are out.
Give him his due respect, Phillies fans.

And thank him for THIS!