Seattle welcomed home Junior... and they SHOULD have! 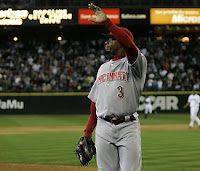 Good for Seattle fans! They gave Ken Griffey Jr a great ovation when he returned.

Old grudges buried... and just like the end of Annie Hall, only the good memories remain.

Thank goodness the schedule makers waited for now to have Griffey return to Seattle for this year...

The anger of his demanding a trade has subsided (and most of the venom directed to A-Rod anyway.)

Griffey has come back from multiple injuries to go back to being the hitter that at one time looked like a lock to break Aaron's record...

And he's done it without a trace of scandal.

Most importantly... he saved baseball in Seattle.

Remember what Mariner baseball was like before Junior?
I didn't think so.

Think of the Devil Rays, Royals and Nationals combined and that's what they were.
From 1977, their first year, to 1988, the year before Griffey's arrival, they were a laughing stock in bad uniforms and a dome.

No winning seasons in an era where no teams repeated.
Their lone highlight was coaxing Gaylord Perry out of retirement to win his 300th game.

They were so bad that even Dick Williams couldn't turn them into winners... and he put together a division champ in Montreal! They threatened to move to Tampa (remember when that seemed like a good idea?)

And then Junior arrived.
And soon they had their first winning season.
And soon star quality players started springing up around him.
Edgar, Big Unit, Buhner... and some young kid named Alex Rodriguez.

And then in 1995, they came back from a huge deficit behind the California Angels (not to be confused with the Anaheim Angels or the Los Angeles Angels of Anaheim) won a one game playoff and then beat the Yankees in a mind boggling heart stopping 5 game series.

And Junior hit 5 homers in those 5 games... and dashed home with the winning run from first in the bottom of the 11th.

They didn't make the Series but suddenly winning in Seattle was no longer preposterous. 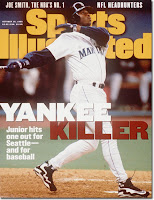 Seattle fans have had more than a decade of winning baseball and reason to hope.
They've also had the most famous names in the game in Mariner uniforms.

Gone are the days of calling Alvin Davis, Jim Presley and Dave Valle the big names.
The Mariners used to be so desperate they traded veterans TO Montreal.

Since Junior arrived stars like A-Rod, Big Unit, Ichiro and now King Felix have been Mariners.

Imagine a team like Tampa or Washington having a great run like that, even without a pennant!

It can all be traced back to Junior... who deserved that ovation!
Posted by Sully at 9:22 AM