Did you feel a draft? 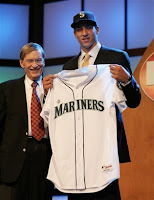 So the baseball draft was this week.
Did you watch it?

OF COURSE YOU DIDN'T!
Why would you?

I've already made my feelings about the NFL Draft and its coverage known.

Well, as silly as the football draft coverage is, the baseball draft is 10,000 times more riddiculous to televise.
At least in college, you have most of the players competing in the comparable setting of Division 1 NCAA football.

When they draft a hitter out of high school, who knows what level of talent they were playing against?
Some guy hit 35 homers in 40 games with a 4.821 OPS?

And making projections from the draft is equally insane.

The Braves did not draft high school phenom Todd Van Poppel in 1989 and they were chastised.
So instead of choosing a guy who would have 2 servicable seasons as a middle reliever, they were stuck drafting Chipper Jones... a potential Hall of Famer who won an MVP and help lead the Braves to 3 pennants and a World Series title. 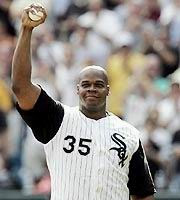 The White Sox were fooling passing up the opportunity to draft the multitalented sure fire star Earl Cunningham.

Frank Thomas became the greatest hitter in White Sox history while Earl Cunningham has appeared in as many games in the majors as me.

What's sadder?
The fact that the draft is televised or that some A's games aren't?
Posted by Sully at 8:56 PM