My thoughts on the two most recent A-Rod controversies 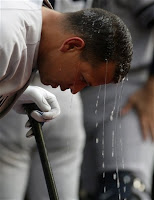 A few people have e mailed me privately wondering why I haven't commented on A-Rod's infidelity nor his yelling "hey!" during a pop up distracting the Blue Jays' third baseman the other day.

Could it be that I don't care about either?

CONTROVERSY ONE
Alex Rodriguez is an unfaithful husband.

Wow, I don't think even Razor could have predicted that!

You mean a famous, handsome, athletic, rich ego maniac who spends weeks at a time on the road in fancy hotels was unfaithful?

IT MUST BE A FIRST!

Now there is a slight ripple effect to this controversy.
First of all, someone at the Post got a bonus for the STRAY ROD headline. 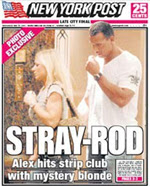 And I'm sure Joe Torre is so happy that all of this is happening on the eve of another Red Sox/Yankees series.

I'm sure the Boston media will let it blow over.

So will the fans, no doubt. They overlook details like that in Fenway.

But I really don't care.
I know ballplayers run around on their wives. Not all of them, but a lot do.

And while that stinks, it also doesn't affect my life one bit.

Yankee fans should be concerned about how he plays on the field and that's it.

I cheer for Curt Schilling 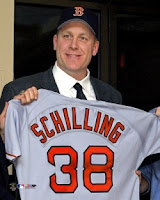 even though he is a right wing Christian coalition blow hard.

I don't care about his politics. I care that he can throw a little horse hide ball past grown men swinging a bat. And that's all. And if being a blowhard makes him a better pitcher than so be it!

In fact I think finding morality can hurt a player. When Gary Gaetti was a hellraiser, he was an All 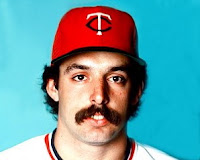 He should have gone back to drinking.

It's irrelevant. We should know by now to not expect these guys to be beacons of morality.

Of course, for a guy as obsessed about his image as A-Rod is, he may have thought about separate cabs. I know cab fare can be expensive, but Cynthia might be getting a lot of that $250 million contract now!

Again, a nasty divorce and faces all over the tabloids might be the last straw before he opts out.

Hell, if the Yankees fall any further in the standings (if that's possible) why not consider trading him?

Also, for a guy who wants to emulate Jeter, he missed a

crucial lesson from the captain.

A-Rod yelled and distracted a Blue Jays infielder during a pop up.

I didn't realize baseball stadiums were supposed to be as quiet as Wimbledon now.

How is that any different than pulling a decoy play?

Besides, the Yankees needed a win any way possible and A-Rod would do anything short of slapping the ball out of someones glove. 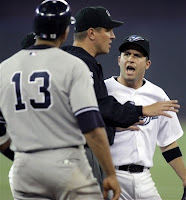 So, this extensive post not withstanding... I don't care.

Red Sox/Yankees tomorrow.
THAT'S what I care about.
Posted by Sully at 12:12 AM