The Magic Number is 82 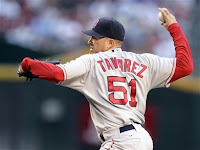 Thanks to latest appearance of the extra terrestrial in Julian Tavarez's body, the magic number has been whittled down to 82.

And MAN this was a great way to win a game. 5 runs in the first, no stress the rest of the night, no manic trips to the computer or the XM radio for an update. I could spend time with my wife and kids and not be secretly fretting.

The bats are alive (I DARE you to walk Ortiz to pitch to Manny now!) and other hitters are waking up too!
How awesome was it they walked Varitek to pitch to Coco, only to have Coco hit a 3 run, game over before the Braves first at bat, shot?!

My God... what if Tavarez is actually becoming an effective starter? I mean not a "filling in the fifth starter role" good job but what if he is becoming an actually good starting pitcher?

He hasn't lost since May 11 and has pitched into at least the 6th in all 7 starts since then, including 7 innings in each of his last 2!

Day off tomorrow. Let's hope for some Colorado help tomorrow afternoon.
It's good to have a double digit lead back. Now to have the Yankees at .500 again!
Posted by Sully at 10:34 PM